Today is the feast of St Agatha, Virgin and Martyr. Her main centre of devotion is Catania in Sicily, where the Festival of Saint Agatha is the most important one, she being the patron of the city and each year her feast is celebrated from February 3rd-5th.

In the cathedral in Catania is this famous and striking reliquary bust:

The bust contains the relics of St. Agatha and many of the jewels that adorn the reliquary are pectoral crosses which belonged to the bishops of Catania, Dusmet, Francica Nava and Ventimiglia. There is also a ring that belonged to Queen Margherita, who gave it in 1881 during a visit to Catania, and a necklace set with emeralds, which was a gift from the Viceroy Ferdinand de Acuna. The crown is said to have been given by given by King Richard the Lionheart when he was on Crusade.

Saint Agatha's reliquary is attributed to "Giovanni di Bartolo", a goldsmith from Siena who lived in the second half of the fourteenth century.The bust is made of enamelled silver .Two kneeling angels flank it. The saint has a very rich mantle open on the front and adorned with vine shoots and with garlands of flowers partially enamelled. The chromatic effect is increased by the redness, once enamelled, on which a naturalistic colouring has been laid. A hinged window allows a periodic inspection of the relics. The reliquary bust is at present mounted on a sixteenth century base which lies on an octagonal pedestal enlarged on two sides by two small corbels.

Above this a series of eight translucent plates recording the gift of the reliquary: the arms of the Aragonese, who ruled Sicily at the time, of Catania, of the Pope, of the two bishops who paid for it and the images of Saint Catherine of "Alessandria" and of Saint "Lucia ". There are also two rectangular plates that represent the bishops "Marziale and Elia" kneeling as if they were praying to the saint. The first ordered the statue and the second had it finished in 1376.

The details of the figures in enamel show a luxurious effect that "Giovanni di Bartolo" reaches by joining together the painted enamel and the gems, a technique that is foreign to the Sienese jeweller, where "Bartolo" came from, but it was present in the richest French production of the late fourteenth century, which the Tuscan goldsmith seems to follow. 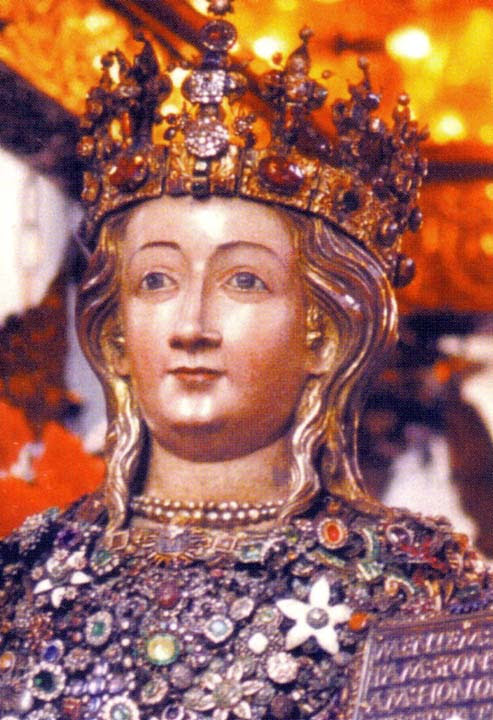