Persian Prince at the Oxford Union


I became interested in Iran - and the Iranian monarchy - in the early 1960s when one of my cousins met and married an Iranian studying in this country.  As a consequence there was additional interest on my part in the coverage of the Coronation of the Shah in 1967, the celebrations of the 2500th anniversary of the monarchy established by Cyrus the Great in 1971 at Persepolis, and the dreadful and shocking events of the revolution in 1978-9 and the death of the Shah in 1980.

Last night the Oxford Union had as a guest speaker Prince Reza Pahlavi, Crown Prince under his father and the man who in the eyes of loyalists should have succeeded his father as Shahanshah in 1980. In particular I recall seeing him on television and in photographs of him as a solemn seven year old at the 1967 Coronation. There is a guide to the Pahlavi dynasty here.

The Crown Prince of Iran

There is an online biography of him which can be read here. His own website can be read here. He is now spokesman of The Iranian National Council for Free Elections and an advocate of human rights for Iran, calling for a secular state and for free elections.


The Prince has considerable presence, and having spent many years in the US is fluent and relaxed in English. He had a large audience who almost filled the Union Debating Chamber.

He began with an address on "Democratic Iran: a precondition for peace in the Middle East." After strssing to his hearers their good fortune in sharing in an unrestricted educational system, and the fundamental importance of for society he outlined his view that the five continuing crises in the Middle East - the war in Syria, the continuing Israeli-Palestinian dispute, the situations in Afghanistan and iraq, the Shia-Sunni conflict and the risks posed by Iran's nuclear programme - all bore the footprint of the Islamic Republic of Iran and its involvement. The current regime sought regional hegemony, and fermented turmoil across the region.

It wasa regime anxious to export its ideology, and indeed one which need to expand to survive, and identified the "National Interest" as its own. He was sceptical as to the possibilities of it changing of its own accord. It is, in his view, a system which cannot reform itself, and there was no real change even if it was perceived differently.

Dialogue was needed with the regime and with secular democrats within Iran.

He then took a series of questions from the audience - the acoustic was not ideal, but they raised
substantive points and received full and thoughtful answers.

In a theocracy such as Iran the possibility of an uprising like the Arab Spring was more difficult, and what was neded was national reconciliation and amnesty, civil disobedience not an uprising. If there were not free elections the people had to choose between the lesser of two evils.


He envisaged a future secular democracy that transended all divisions, and that free elections were the best way of achieving that. By a secular government he did not mean an anti-religious one but one that seperated the state from the religious sphere, but recognised all faiths.

Asked about his own legitimacy as a spokesman, and that he has been critical of some of the actions of his father and grandfather as Shah, he said he was not concerned with the forms of government, but with what in a post referendum Iran would unite.

Democracy would now mean more than the provisions of the 1906 Constitution, and although different forms of democracy existed across the world basic principles such as an independent justice system were central to it. This was not something that could not be developed in the Middle East. He made the telling point that Iran which should be the Japan of the region had become its North Korea.

Cyrus the Great had recognised human rights in a form centuries ago, yet in Iran rights what had been accepted and developed had been lost.

One questioner raised the point that did not the West have to change its attitudes, maintained over many decades, to assist the process of change; the Prince thought trust and transparency were key principles here.

Under the Shah the country had acted as one but with recognised national diversity, but since 1979 there had been a world of "Us" and "Not Us" and there were growing risks of ethnic and religious divisions. Under the present regime the fundamentalist perception of religion was a perversion of the country's faith.

He hoped there would be a"Gorbachev moment" rather than an outcome like thos ein Libya and Syria for Iran, and when asked  by the final questioner if the evidence of countries like Turkey and Egypt did not suggest the free elections in the Islamic world usually resulted in the victory of Islamicist parties the Prince said he hoped the result would be otherwise.


The clear majority of the audience gave the Prince a warm and friendly welcome, and the talk and questions provided a very interesting insight into the possibilities for his country. I am in no position to assess the likelihood of a peaceful transition taking place in Iran or to know how widespread the call for change is, let alone what might result for the future shape of the country.

However I will say what regular readers might expect me to say, and that is  that  whilst there may well have been vainglorious  episodes and unrealistic expectations under the late Shah, and distortions of the economic life of the countryconsequent on the oil price ris e of 1973, and that both Pahlavi Shahs may have sought to change too much too quickly for their people to accept easily, but that an Iran ruled by Shah Reza II would be infinitely preferable to the present system, and offer hope for the future. 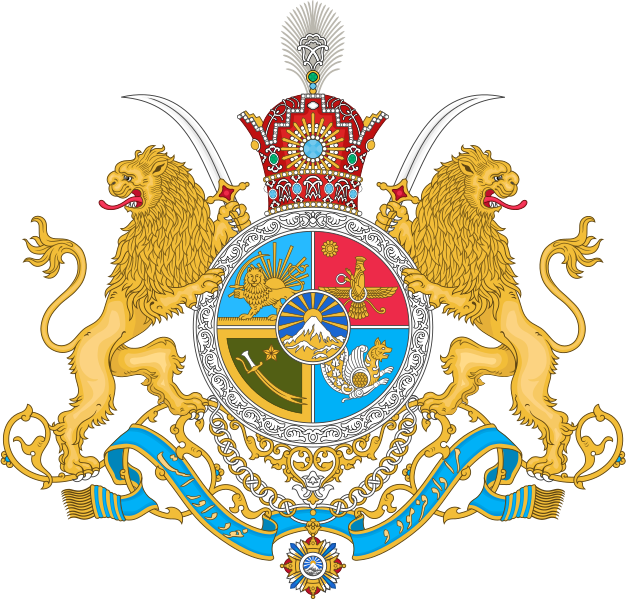 Imperial Coat of Arms of Iran under the Pahlavi Dynasty, used from 1925 to 1979.
The shield is composed of the Lion and the Sun symbol in first quarter, the Faravahar in the second quarter, the two-pointed sword of Ali (Zulfiqar) in third quarter and the Simurgh in the fourth quarter. Overall in the center is a circle depicting Mount Damavand with a rising sun, the symbol of the Pahlavi dynasty.
The shield is crowned by the Pahlavi crown and surrounded by the chain of the Order of Pahlavi. Two lions rampant regardant, holding scimitars supports the coat of arms on either side.
Under the whole device is the motto: "Mara dad farmud va Khod Davar Ast" ("Justice He bids me do, as He will judge me" or, alternatively, "He gave me power to command, and He is the judge").
Some of the colours were changed in 1971.
Image:Wikipedia
Posted by Once I Was A Clever Boy at 10:21