The resignation of Pope Benedict XVI - one year on

Tuesday was the anniversary of the announcement by Pope Benedict XVI of his intention to abdicate as Supreme Pontiff at the end of the month.  A lot has happened in the intervening twelve months, and there has been much speculation as to why the Pope made his announcement, and reflection upon his legacy. 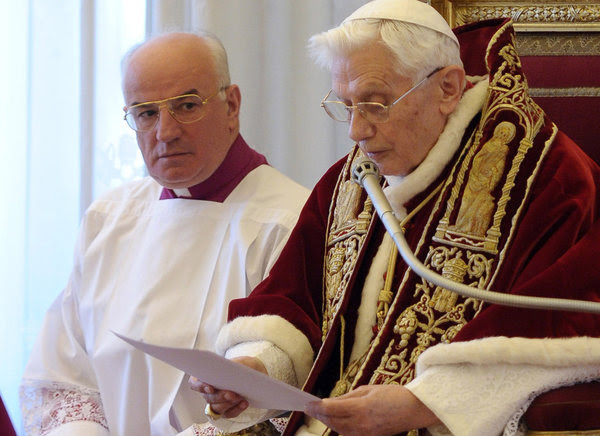 Yesterday the Zenit Catholic news website had a series of reports about the anniversary, which may be of interest to readers, and are in any case a warm tribute to the Pope Emeritus and his contribution to the life of the Church.

As an academic friend and I agreed some months ago we are still mourning Pope Benedict's departure from the Chair of Peter, whilst respecting his decision. His legacy is significant and looks  capable of influencing the Church for many years to come.

It also appears that there are some who are anxious to take the Church in different directions that Pope Benedict would like or wish, and indeed to undo what Pope Benedict achieved both before and after his election. That will, hopefully, be resisted within the life of the Church. The very positive statements quoted above are a remedy in part for that threat. Vigilance is required to secure the Ratzinger heritage and to continue to convey his message and insights. Nonetheless Pope Benedict remains his own best guarantee by his long and prayerful life and witness to the Church and the world.