The bones of Charlemagne

January 28th was the 1200 anniversary of the death of the Emperor Charlemagne - so by the Julian calndar I am not far off the exact anniversary with this post.

There is an online biography of Charles the Great, which also looks at his legacy in governance and culture, with illustrations and links which can be read here. 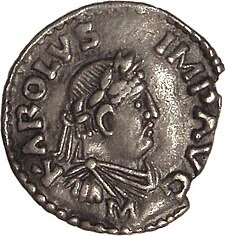 
The online biography given above includes contemporary descriptions of his appearance, which I have slightly adapted:

His biographer, Einhard, author after his death of the Vita Karoli Magni says in his twenty-second chapter:


"He was heavily built, sturdy, and of considerable stature, although not exceptionally so, since his height was seven times the length of his own foot. He had a round head, large and lively eyes, a slightly larger nose than usual, white but still attractive hair, a bright and cheerful expression, a short and fat neck, and he enjoyed good health, except for the fevers that affected him in the last few years of his life. Toward the end, he dragged one leg. Even then, he stubbornly did what he wanted and refused to listen to doctors, indeed he detested them, because they wanted to persuade him to stop eating roast meat, as was his wont, and to be content with boiled meat."

The physical portrait provided by Einhard is confirmed by contemporary depictions of the emperor, such as coins and his 8-inch (20 cm) bronze statue kept in the Louvre . In 1861, Charlemagne's tomb was opened by scientists who reconstructed his skeleton and estimated it to be measured 1.90 m (75 in). An estimate of his height from a X-ray and CT scan of his tibia performed in 2010 is 1.84 m (72 in). This puts him in the 99th percentile of tall people of his period, given that average male height of his time was 1.69 m (67 in). The width of the bone suggested he was gracile but not robust in body build. He has been described as a result as "very tall but not robust" by the modern researchers on his skeleton cited below.

[I am tempted to add that Einhard did not consider him exceptionally tall - our perceptions of medieval personal stature may well need revision - and also that for someone not robust he did n't too too badly - Clever Boy.]


"He used to wear the national, that is to say, the Frank, dress - next his skin a linen shirt and linen breeches, and above these a tunic fringed with silk; while hose fastened by bands covered his lower limbs, and shoes his feet, and he protected his shoulders and chest in winter by a close-fitting coat of otter or marten skins."

He wore a blue cloak and always carried a sword with him. The typical sword was of a golden or silver hilt. He wore fancy jewelled swords to banquets or ambassadorial receptions. Nevertheless:


"He despised foreign costumes, however handsome, and never allowed himself to be robed in them, except twice in Rome, when he donned the Roman tunic, chlamys, and shoes; the first time at the request of Pope Hadrian, the second to gratify Leo, Hadrian's successor."

He could rise to the occasion when necessary. On great feast days, he wore embroidery and jewels on his clothing and shoes. He had a golden buckle for his cloak on such occasions and would appear with his great diadem, but he despised such apparel, according to Einhard, and usually dressed like the common people.


These descriptions can now be set alongside the findings of modern reasearchers from a scientific examination of what are believed to be the Emperor's bones . He has therefore joined that group of medieval rulers like King Richard III and King Alfred or Edward the Elder, on whose post mortem examinations  I have commented on in recent months. I lifted this report from the Huffington Post story about the bones of Charlemagne:

"After 1,200 years, researchers have confirmed that a collection of bones, long interred in Germany, are those of eighth-century ruler Charlemagne.

Also known as Charles I or Charles the Great, Charlemagne controlled a wide swath of Western Europe between 768 and 814 A.D. Remembered for his efforts to unify Germanic peoples and convert them to Christianity, Charlemagne was crowned Holy Roman Emperor in 800 and is sometimes referred to as the father of Europe.

Due to his holy status [He was beatified by the local bishop of Aachen in 814, a cult confirmed by Pope Benedict XIV in the eighteenth century, and canonised by AntiPope Pascal III in 1166; all his acts were revoked in 1179 by Lateran III - Clever Boy], Charlemagne's bones do not all rest in one place. Instead, they were scattered to various reliquaries and shrines.

The researchers have identified the ruler's skull, kept in a gold bust at the Aachen Cathedral in Germany, and his arm and leg bones, contained in an elaborate sarcophagus, Discovery News reported. 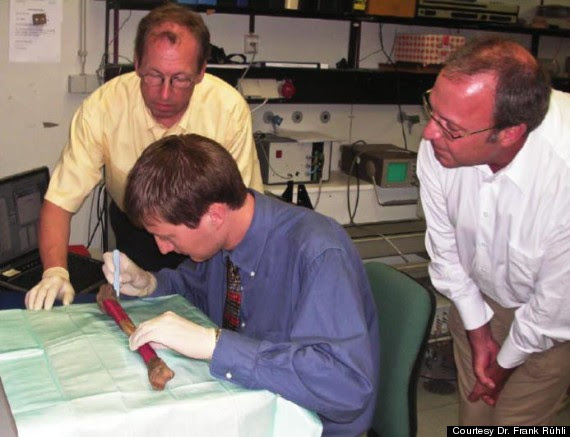 Dr. Frank Rühli and several colleagues examine a leg bone believed to have belonged to Charlemagne.

The finding is the result of a 26-year effort to match the cathedral bones to historical records describing Charlemagne at the time of his death.

"There is always doubt about this kind of bones, still I am quite sure (but not 100 percent) that they may belong to him," researcher Dr. Frank Rühli, of the Centre for Evolutionary Medicine at the University of Zurich, told LiveScience.

Using X-rays and CT scans, researchers also confirmed that Charlemagne stood about 6 feet tall and was quite thin, Discovery News reported. "He must have towered over 98 out of a 100 persons in his time," Rühli told Discovery. 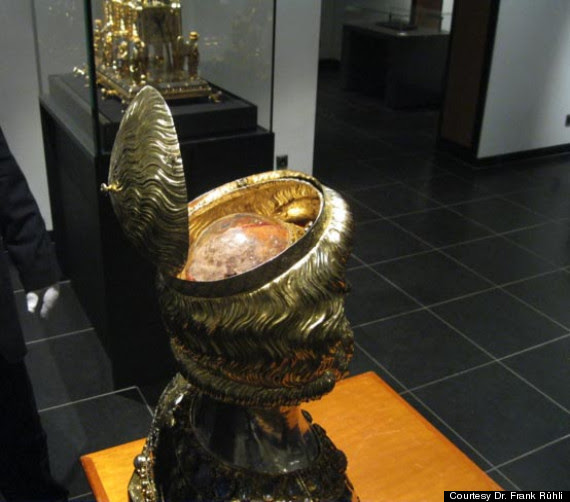 Part of a skull believed to have been Charlemagne's is kept in a gold bust of the ruler. 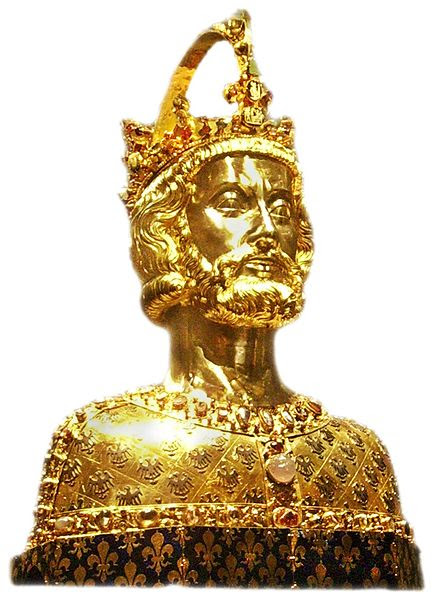 The reliquary bust of the Emperor at Aachen.
Given by Emperor Charles IV after 1349, the crown being that of the Kings of the Romans.
The Emperor is shown with both the Imperial eagle and the French lilies on his costume
Image:Wikipedia 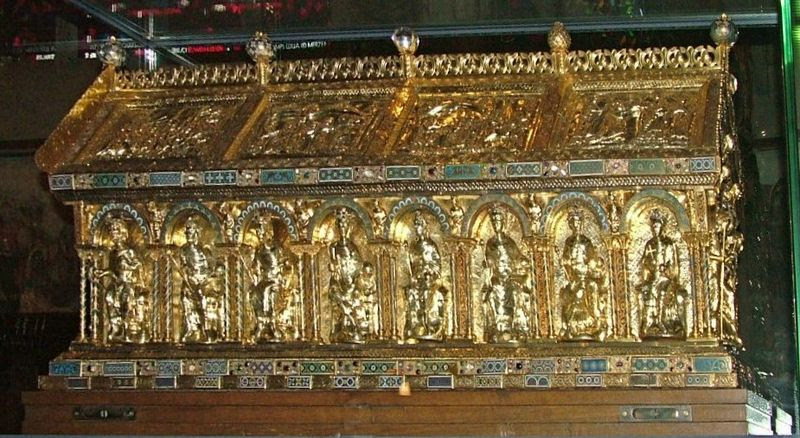 The Karlsschrein which contains some of the Emperor's bones at Aachen. It was given by Emperor Frederick II (d.1250) in 1215
Image: Wikipedia
Posted by Once I Was A Clever Boy at 10:14