This morning I gave a guided tour to some visitors on the Oxford of Wyclif and of the Reformers.


The Oxford DNB has an excellent and extensive biography of John Wyclif by Anne Hudson and Antony Kenny, which must be the best short account available, and one that combines scholarship of a high degree with lucidity and balance. It can be accessed here.

We began in the High Street with St Mary's Church. The thirteenth century tower and early fourteenth century spire are one of the relatively few surviving buildings from Wyclif's time. Along with the adjacent Old Convocation House of 1320, from which the University governed itself, they are buildings Wyclif would have known throughout his time in Oxford. In his time the church was used for meetings of the Masters of the University and for degree ceremonies; in the mid-sixteenth century it was used for the trials of Latimer, Ridley and Cranmer and for the procedural ceremonies before their executions in Broad Street. The tower and spire of St Mary's Church

Along the High Street to the east is The Queen's College which was a college for 'Northeners', of which Wyclif was of course, one. He lived in the college in the early 1370s and paid  rent for a room there in 1380. This was one of the leading colleges in the University in these years.  The buildings he knew have all been demolished to be replaced by the present fine example of English Baroque. Fortunately we do possess David Loggan's birds-eye view of the college buildings drawn beforehand,and which show some features which Wyclif would have known.

The Queen's College as it appeared in 1675
The High Street is to the left, and the road in front is Queen's Lane

On the opposite side of Queen's Lane is the medieval church of St Peter in the East. It now serves as the library of the adjacent St Edmund Hall, but the building must be substantially as it was in Wyclif's time. 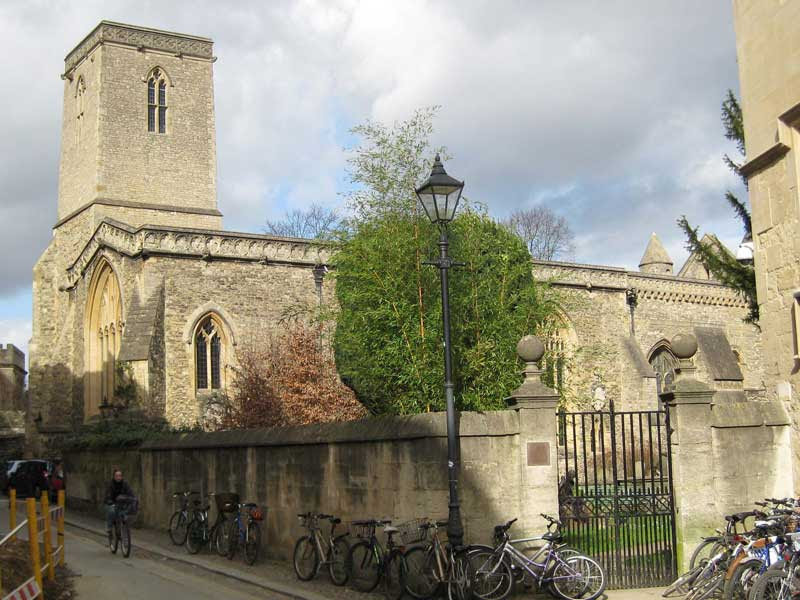 St Peter in the East

St Edmund Hall became a notable centre for Wycliffite or Lollard academics in the early fifteenth century. Notable amongst these was Peter Payne, master of the adjacent White Hall before becoming Principal of St Edmund Hall and then fleeing to join the Hussites in Bohemia. His remarkable career can be read in the Oxford DNB life of him here.

South of the High is Merton. which in the early fourteenth century had been the leading college in the time of the 'Merton calculators'. Wyclif was a Fellow of Merton in 1356, and the chapel he would have worshipped in still survives, with addition of the tower of 1450 and the completion of the transepts. Much of the glazing is glass which would have been there in the 1350s.


Immediately to the south of the chapel is Mob Quad, the oldest quadrangle in either Oxford or Cambridge; there is an account of it here. The entrance and muniment room is referred to in the college accounts for  1288 -91. The north and east ranges date from 1310-20, whilst the south and west sides were built after Wyclif had left the college, but whilst he was still in Oxford, in 1373-8. 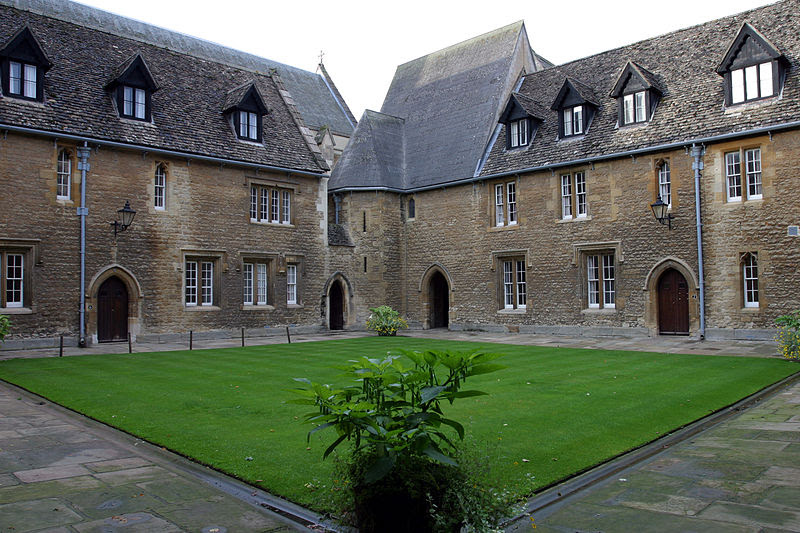 The north and east sides of Mob Quad, with the chapel behind

To the west, in Oriel Square, is Canterbury Gate of Christ Church. This and the quadrangle it leads to occupy the site of Canterbury College - a college initially founded by Archbishop Islip to accommodate both secular and monastic clergy and of which Wyclif was a member in the later 1360s. This was until he and the other seculars were removed by the Benedictine monk- Arcbishop Langham in 1370; this was seen by K.B. Macfarlane as part of the origin of Wyclif's hostility to the possessioner monastic orders.
The old gate of Canterbury College before it was taken down in 1775, and the new gate of 1778
A print published by Joseph Skelton in 1820

Behind the site of Canterbury College is the cathedral. In Wyclif's time this was the church of the Augustinian priory of St Frideswide, housing the shrine of the patroness of both the town and university. Much of the building as it was in the mid- to later fourteenth century survives despite numerous alterations and adaptations of the church to meet different liturgical fashions and requirements.

In 1382 the Augustinian Canon Philip Repyngdon, then an enthusiastic supporter of Wyclif's ideas, preached a sermon in the priory churchyard at Corpus Christi, June 5th, endorsing Wyclif's ideas. This site is now probablty represented by the Canons' Garden to the north of the cathedral or may lie under part of Tom Quad.  Summoned before the authorities over a series of sermons and disputation speeches  he formally recanted his errors in St Frideswide's on November 18th that same year. Subsequently Canon Repyngdon returned to his home at Leicester abbey, where he may have previously introduced Wycliffite ideas to the town, but now retuned to orthodox belief, went on to became Abbot, confessor to King Henry IV, and was Bishop of Lincoln from 1405-19, and offered a Cardinal's hat by Pope Gregory XII. The Oxford DNB life of him can be read here.

We then walked up Oriel Street - one which Wyclif must have used to cross the High and into Radcliffe Square. In 1378 he was temporarily under house-arrest on the order of the Chancellor in Black Hall which stood on what is now the Square to the north of St Mary's.

The Osney Schools where he would have attended and given lectures were rebuilt after his time and then demolished to make way for Sir Thomas Bodley's extensions to the Divinity School and Duke Humphrey's Library (1420s-1480s), and their site lies just in front of the Proscholium of the Bodleian, which occupies what had been the continuation of School's Lane.

The Austin Friary, where Wyclif was detained in 1378, stood on the site of Wadham College and the King's Arms - a friend of mine used to describe this as wyclif being arrested in the pub.

Along Broad Street lies Balliol, another 'Northern College',where Wyclif was Master in 1361, and where he may have been before his sojourn at Merton. In recent year the college under the Mastership of Sir Antony Kenny has helped advance Wyclif studies, although today nothing remains of the buildings he would have seen - the oldest parts are early fifteenth century, and most of it a handsome Victorian rebuilding of 1863.

The front of Balliol as rebuilt in 1863

Oxford in 1578
The middle part of Ralph Agas' map shows the city more as Wyclif and the Protestant Reformers would have known it. The map has the south at the top.
St Mary's is centre left, Merton top left, Canterbury College was just above Peckwater Inn, the Schools are just to the left of the lower centre, and Balliol at the lower right. The Queen's College is just off the view to the centre left. The city walls, still unencumbered by housing, can be seen towards the bottom of the view. The Northgate, where the Protestant bishops were imprisoned adjoins St Michael's church (lower right handside)
In Wyclif's time New College was just beginning in 1379 (bottom left), and Lincoln (1427) All Soulds (1438) and Brasenose (1509) in the centre had still to be founded.

All in all, after more than six centuries there are a surprising number of buildings still surviving and in use in Oxford which Wyclif would have known.

Have you ever considered writing a book about Oxford? That was a wonderful post!

Well I have written a short (145pp) history of St Thomas' Church, and enjoyed the process, if not always the stress of self-imposed deadlines!
Of the making of books about Oxford there seems no end, and if I had the time I would want, obviously, to say something worthwhile and a bit different - so not just another general book - unless, that is, someone offered me lots on money... Maybe a portrait of the town and university in aparticular era - rather like the tour of Wyclif's Oxford. The recent magisterial History of the University is a wonderful resource, but not immediately accessible as reading material for the more general visitor. Maybe I should think about the possibilities. Ah, for the time to do something!