Mass at Merton with the Order of Malta

Earlier this afternoon I attended a celebration of Mass in the Extraordinary Form in the glorious setting of the chapel of Merton College. The Mass was attended by HMEH the Prince and Grand Master of the Sovereign Military Hospitaller Order of St John of Jerusalem, of Rhodes and of Malta, Fra' Matthew Festing. The Grand Master is visiting Oxford for a couple of days and is due to address the University Catholic group the Newman Society this evening about the function of the Order in the presert day under the title of Charity in the 21st Century. There is a biography of the Grand Master here.

The Mass was a Missa cantata for the feast of the Passionist St Gabriel of the Sorrows of Maryand was celebrated by Fr John Osman from Dorchester, a chaplain of the Order. This was a rather low-key affair - Fra' Matthew and the other Knights present were in ordinary day dress rather than their habits. Given that it was mid-afternoon on a weekday there was a good congregation - many of them young men who have become Companions of the Order and assist in its extensive care work.

When we arrived we were given prayer cards for the cause of the late Grand Master Fra' Andrew Bertie, of whom there is a biography here. 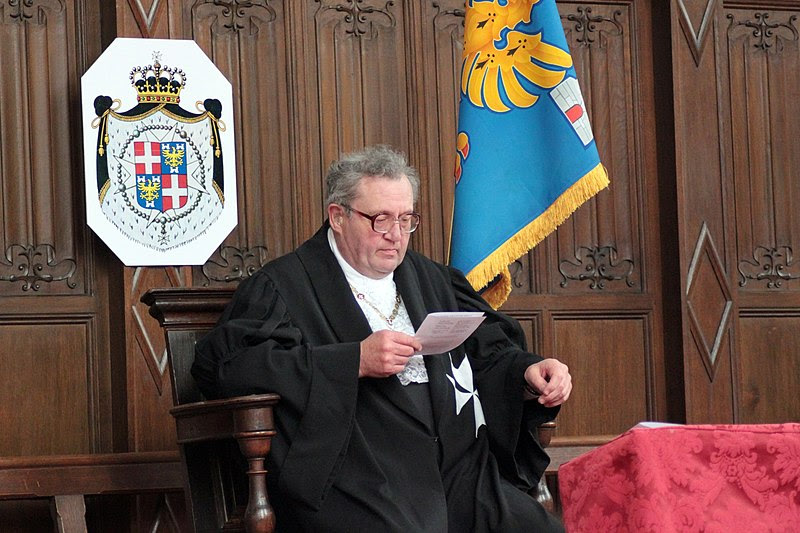 The Grand Master on  previous visit to Merton in 2010

Thinking about the Sovereign Order it occurred to me that given the variety of options raised in the 1950s and early 60s as to the future of the island of Malta in terms of independence or integration into the UK befoe it became an independent Commonwealth nation in 1965 it might not have been such bad idea to have retuned tit to the Knights. They form a sovereign body - complete with an airforce at one point - , they had ruled the island from the time of the Emperor Charles V and Malta is a notably Catholic place. A missed opportunity?