Today is the 600th anniversary of the death of Archbishop Thomas Arundel of Canterbury.

Archbishop Thomas Arundel
The Archbishop is surrounded by monks of the cathedral priory at Canterbury or members of his archiepiscopal household.


Born in 1352 he studied at Oxford, and lived in Oriel, where he and his father, the Earl of Arundel, built the college chapel as an expression of their thanks. Leaving Oxford he was appointed in 1373 as Bishop of Ely at 21 - his youthfulness led the Pope to comment about him being the youngest episcopal appointment he was aware of - then, in 1388, Archbishop of York. He served as Lord Chancellor and was a significant political figure in the 1390s, until his translation to Canterbury in 1396, exile the following year and return with Henry of Lancaster in 1399, serving again as Chancellor twice under King Henry IV.

An aristocrat to his fingertips he was also able and conscientious as an administrator, and was to prove a resolute defender of the Catholic Church against Lollardy. His death was as a conseqence of a stroke which might have been triggered by his exertions in the preceding weeks in suppressing the Lollard Rising of 1414.

In late 1408 he had caustic things to say about the subject of my research, Richard Fleming and his associates in Oxford whom the Archbishop saw as supporting Lollardy even if only by resisting his authority to visit the University to root out the problem at its source. 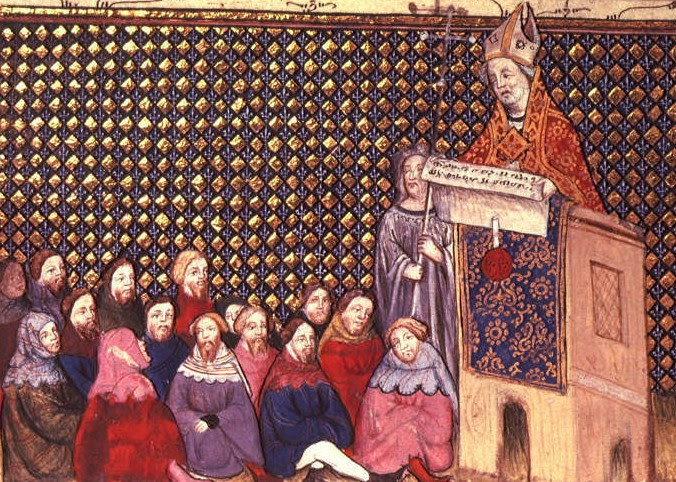 The nave of Canterbury Cathedral, completed under Archbishop Arundel about 1405.
His tomb was in the third bay from the east on the north side, just in front of the present pulpit, until it was destroyed by Cranmer in 1540.

The tomb of King Henry IV and Queen Joanna in Canterbury Cathedral.
Archbishop Arundel helped place the King in power and crowned him in 1399, and served him as Chancellor and advisor for much of his reign.