Who was responsible for the Great War?

A friend sent me the link to a piece on the BBC website where they had asked the opinions of ten historians as to whom they thought responsible for the outbreak of the Great War in 1914. Their answers can be read here.

It is perhaps easier to say who I do not agree with than those I do. Much as I respect his achievement in his massive three part biography of Kaiser Wilhelm II - I hope to post about the first volume covering in vast detail the period 1859 to 1888 in the near future - I do not agree with Professor Rohl's interpretation of the Kaiser. I find Christopher Clark's interpretation much more credible and convincing. Nor do I incline to others in the same vein, or to Sir Max Hastings' confident anti-Germanism.

I am much more inclined to the views of Professors Evans, Hirschfeld and McMeekin, though I would perhaps not agree wholeheartedly with them.

I would certainly want to avoid too much of the "We are all guilty"attitude exemplified by the late, great, Peter Simple's Professor Heinz Kiosk in this matter, but a collective failure by political leaders and, in their own way, the military, to understand what was at risk, or how the world had changed in the preceding decades seems to me a central point. Governmental machines had taken on a life of their own which made the slide to war, once it began, almost unstoppable.

The debate should not be so much "Who caused the War " - that has been argued with little positive result but much harm since July 1914, but more who caused what to happen as and when it did during the crisis. On that approach responsibility for specific acts  becomes more certain and more precise in its attribution, but the end result depends on the next reaction and  move in the diplomatic game.

Was the Great War an accident, or was it an accident waiting to happen, or was it some sort of conspiracy? I doubt the last explanation, as may already be clear. If it was a chance accident or an ever more likely one to happen it is a terrible warning. It may also be somewhat futile to be still trying to pin the blame on one or another country. Governments reacted as they might have been expected to do - perhaps as, by the light of the times, they should have, but perhaps also not - and the tragedy may be that no-one in the right position had the ability to see the way things were heading. In that situation that failure to restrain policy or offer mediation led to terrifying disaster.

However if it comes to responsibility we should not look to the Foreign Offices and General Staffs of Europe. Given the delicate balance of advantages and alliances maybe, just maybe we need to recall what set the engine of destruction in motion. Not a grand conspiracy, not a failure of diplomacy, nor a failure of a civilisation. No, we come back to a vile little oik engaging in gesture politics with a loaded gun when a freak of chance gave him the opportunity. Never mind the captains and the kings - locked within a complex system and unable to break out of it - put the blame on Gavrilo Princip. 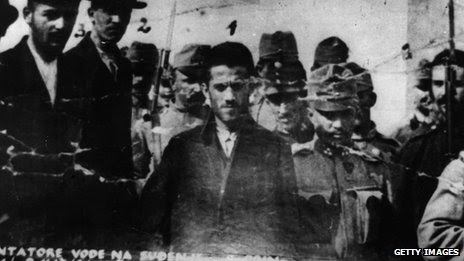