Today is the feast in the Novus Ordo of SS Cyril and Methodius, who are now, with St Benedict, co-patrons of Europe. There is an online account of the Apostles of the Slavs here. 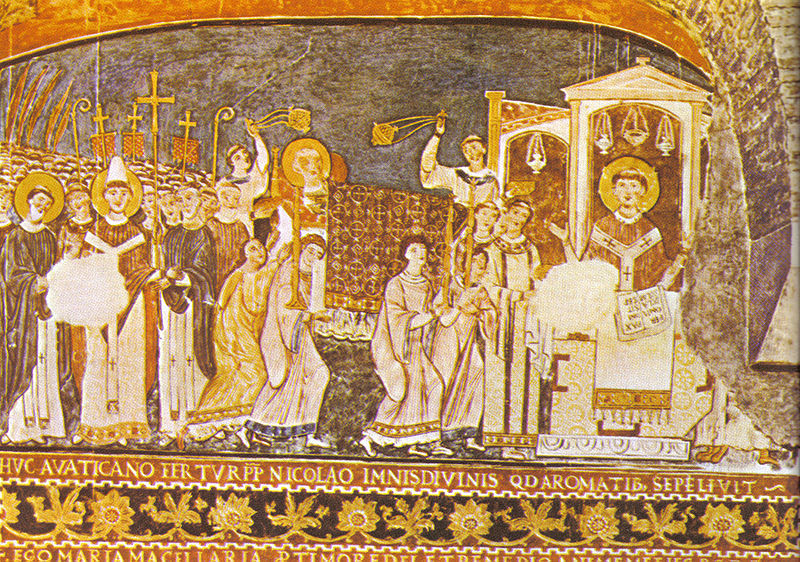 As the online life recounts in 867 the two brothers were invited from Moravia by Pope Nicholas I, the Great, to Rome. They travelled there with supporters and bearing the relics of St Clement. By the time they arrived in 868 Pope Nicholas had died and it was Pope Adrian II who welcomed them, and who decreed quasi-papal honours for Cyril's funeral in 869.

I have chosen this picture because although it is later in date - late eleventh century - it does give an idea of the ceremonial surrounding the Papacy in that period, and very probably that of SS Cyril and Methodius. The details of the vestments are also interesting. The exuberant thurifers are rather good - and haven't we all seen such behaviour in our time?

St Cyril is buried in the church, and there is more about this remarkable building at  Basilica San Clemente official website and at the account in Basilica of San Clemente.


* The picture source describes it thus, but it occurs to me that it might equally depict St Cyril's funeral in 869 when he was accorded Papal honours - see today's Divine Office lection in the Office of Readings - and that a nimbused St Methodius is standing by the Pope as his brother's corpse - rather than bones of the first century St Clement - is carried to its funeral or burial. I have not got time at the momet to check further, but it might make for abetter reading of the iconography.