Possibly the earliest carving to indicate English devotion to St George can be seen at the church dedicated to him at Fordington, which is now part of Dorchester in Dorset. His cult, as being that of an essentially eastern saint in England appears to have developed after the Crusades

The church as it now stands is mainly a handsome later medioeval structure, but over the south door is this carving: 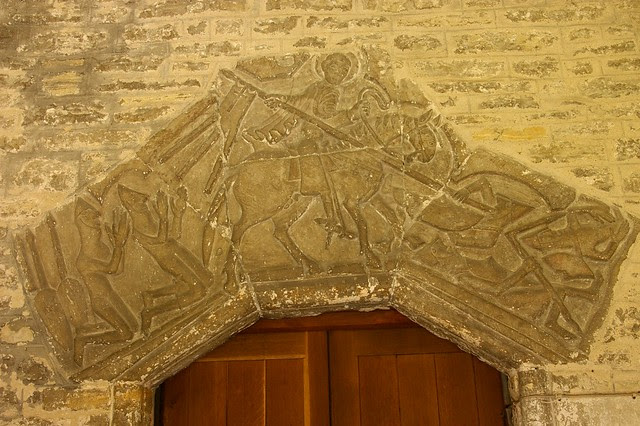 Image: Pryderi on Flickr
It is thought to depict St George coming to assistance of Crusaders when they were  hard pressed by the Saracens at the battle of Dorylatum 1097. The Christain soldiers kneel in prayer or thanksgiving  on the left as St George sees off their opponants on the right. There are some small differences in the armour of the two groups.

I suppose one must imagine the carving originally to have been painted like the carvings at Issoire about which I posted at Easter.

The sculpture can be seen, as I saw it one evening,from outside the church as it is in the open porch - it is well worth walking out to from the centre of Dorchester if you are visting that very interesting town.