The Easter vacation really markls the beginning of the season of conferences and visiting summer schools here in Oxford, and over Holy Week and Easter Week I have again been working with my friends from CBL International who have had a study course for international legal and business students in Oriel. The students themselves were a lively and engaging group drawn from Australia, Austria, Denmark, Germany, Italy and The Netherlands.

I provided tours of Oriel itself, of Oxford and led them on a visit to Blenheim Palace, and yesterday we provided the students with a tour of Legal London. I wrote about a similar day August in my post Legal London.

This required an early start - up before 6 - to get the London coach and navigating the tube system to get to Holborn. From there I acted as guide as we went through Lincoln's Inn Fields to look at Lincoln's Inn, and explaining something of the life and history of the Honourable Societies.

The early nineteenth century Hall and Library of Lincoln's Inn,
opened in 1845

Linciln'S Inn, looking south across New Square
towards the Royal Courts of Justice

After pointing out the historic significance of Carey Street and Chancery Lane en route we had the obligatory group photo outside the Royal Courts of Justice and then went on self-guided tours of that very impressive complex. This time I had more opportunity to look at the display of legal robes and other paraphanalia which illustrtaes the continuity and growth of tradition in the outward expression of the English legal system.

Across the road in the Inner and Middle Temple, where I sat and had my packed lunch, the church was again closed, but I did have more of a chance to look at the memorial to the Order of Templars erected to mark the Millenium. We were fortunate to get in to see the Hall of the Middle Temple, where Twelfth Night was first performed at Candlemas 1602, before having a meeting with a working barrister at his chambers in Fountain Court. 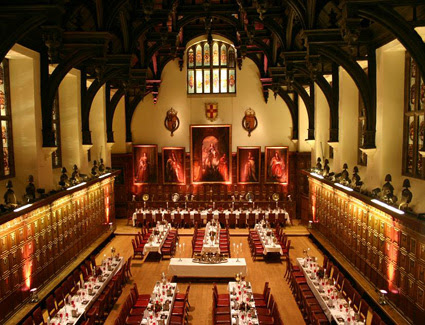 Then, to round off the afternoon, we took the tube to Westminster, and I led those who wanted to join us on a walk up Whitehall, pointing out the historic significance and current use of the buildings of government from the Palace of Westminster up to Trafalgar Square, and ended up with a visit to a pub to give a further aspect, indeed taste, of British life.

After the party dispersed to make their way back to Oxford I headed up to Marble Arch to meet a friend, and we had a very enjoyable Lebanese dinner in the souk that is the modern Edgware Road. Being Middle Eastern the restaurant did not have a drinks licence, so we were forced to end the evening in another pub. There was perhaps something a little odd about two Catholics calmly sitting in The Tyburn, but it provided the opportunity for a wide-ranging and informative discussion - all right, a good gossip - before I headed back to Oxford, getting back at ten past 1 in the morning. Not bad going at all.