This morning, after a busy but enjoyable day yesterday guiding a party round Oxford, I was up betimes when it was scarecely light to get off to London to the Ordination of two friends in the Ordinariate, Daniel Lloyd and James Bradley to the priesthood at St Patrick's Soho Square.

Typically, I managed to be a little on the late side getting away from Oxford - the 8 rather than the 7.35 or 7.48 coach, which seemed to be losing time picking up passengers at every stop in Oxford...and there was no time to be saved by getting off at Notting Hill Gate as the bus stop had been temporarily moved - so jump off at Marble Arch, dash into the underfground station, off to Tottenham Court Road, scramble out of the station so as to be on the right side of Oxford Street, up the stairs to the street level, run round the corner into Soho Street and arrive at the church so as to follow the procession into the buiding at 10.05 Phew!

That all said St Patrick's is very fine indeed, gleaming white and gold (T.S.Eliot fans please note) in the wake of its restoration which was completed last year - and about which there is an article here. 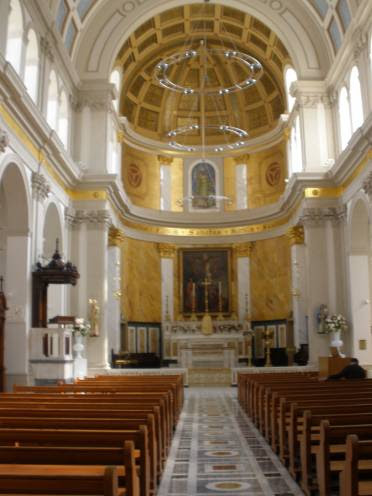 The church was first built in 1792 - "Fr O'Leary's Chapel" - and rebuilt in its present form in 1893. The inscription above the entrance to the church, "VT CHRISTIANI ITA ET ROMANI SITIS" (“Be ye Christians as those of the Roman Church”), a quotation taken from the writings of St. Patrick, seemed very appropriate for the occasion.

The Ordination, conducted by Bishop Alan Hopes, was dignified and impressive, with the church packed, and a considerable number of us standing in the vestibule under the organ gallery at the west end. I will post pictures of the liturgy as they become available.

Looking around in church and at the reception afterwards it was good to see many old friends from Oxford and elsewhere and to catch up with them and their news. There was a sense of confidence to the occasion which applied both in our prayers and good wishes for the two young priests but also for the Ordinariate itself - the congregation included cradle Catholics, longer-standing converts such as myself, Ordinariate members and Anglican friends and well-wishers.  This was the first occasion for such a priestly Ordination within the Ordinariate of two young men who had resigned as Anglican deacons during the first days of the Ordinariate to be received as Catholics and commenced further formation and training. It boded well as an occasion for the future.

Are either of the former deacons, now priested, married?