The election of Mr Newman


190 years ago today, on Friday April 12th 1822, the Provost of Oriel's butler was despatched to the rooms of one of the two young men the Fellows had decided the previous evening to elect to the prize fellowships for which they had sat the competitive examinations by written paper and viva voces during the preceding week - as this year it was Easter Week. Indeed it is an interesting point to reflect upon the fact that the set of examinations started on Holy Saturday and that included Easter Day itself.

Arriving at the rooms of Mr Newman of Trinity over Seal's Coffee House, the site of which is now occupied by the former Indian Institute, and which now serves as the History Faculty Library, the butler found the occupant playing his violin. 'This in itself disconcerted the messenger', not used to such behaviour on the part of Fellows, and his own favoured means of communicating his message was somewhat unusual ' "he had, he feared, disagreeable news to announce, viz. that Mr Newman was elected Fellow of Oriel, and that his immediate presence was required there" '. Newman thought this ' savoured of impertinent familiarity' and ' merely answered "Very well" and went on fiddling'. He then had to reassure the butler that he had the right rooms and man.

However, no sooner had the butler left than Newman flung down the violin and rushed down stairs with all speed to Oriel, past 'the eloquent faces and eager bows of the tradesmen' now anxious for his custom. That journey can have taken him no more than five minutes, yet its significance is immense in the life of Newman and of those he was to influence.

At the gate of Oriel the Fellows were waiting to greet him, and he found himself almost overcome by being greeted by John Keble. At one o'clock there was chapel and he and the other new Fellow, John Ottley. were installed.

Image: victorianweb from the portrait at Keble College
Newman was to write later in life that he 'ever felt this twelfth of April,1822, to be the turning point of his life, and of all days most memorable'. 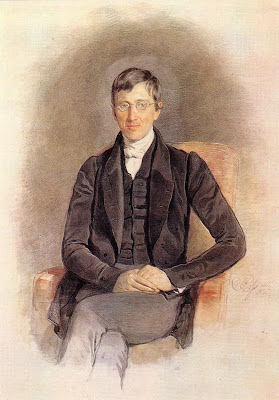