She stands in that high and later medieval central European tradition of royal piety that includes St Elizabeth of Hungary, St Margaret of Hungary and St Casimir of Poland - determined offspring of dynasties who brought aristocratic single-mindedness to the service of the Church and the poor.

Also known as Agnes of Prague (in Czech, Anežka Česká or Anežka Přemyslovna) she was the youngest daughter of King Ottokar I of Bohemia. Very devout, educated in Cistercian and Premonstratensian monasteries, she led a life of prayer and good works while waiting through a series of betrothals that never resulted in an actual marriage. With the assistance of Pope Gregory IX, she extricated herself in 1231 from the last of these unwelcome arrangements of state. She soon founded a hospital at Prague, next to which she established a convent of Poor Clares, entering it in 1233 or 1234 along with five other religious sent by St. Clare of Assisi, with whom she remained in correspondence. Agnes became its abbess, though not immediately and she preferred to be called soror maior.

Agnes was beatified in 1874 and canonized in 1989. Her dies natalis and day of commemoration falls on 6 March. There is a photograph of her as portrayed on a (?) fourteenth-century column capital in Prague in an article about the exhibition which opened last year to mark the 800th anniversary of her birth and which can be read here :
http://tinyurl.com/7p9v8e4


The surviving buildings of Prague's Convent of St. Agnes of Bohemia (Klášter sv. Anežky České), built from the 1230s to the 1280s can be seen here:

There are other pictures of the buildings here, here and here.

The site is now part of the National Gallery. Among its holdings is the Crosiers' Altar (Kreuzherren-Altar) of 1482 with its panel painting on wood of St Agnes ministering to a patient: 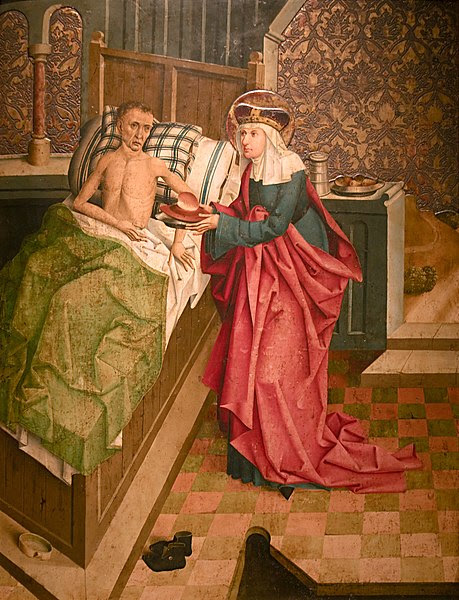 St Agnes tends an invalid.
She still wears the headress appropriate to her rank over her veil.

What appeals about this picture are the details of daily life at the time, typical of fifteenth century Netherlandish and Germanic depictions of late medieval households. The bedding, for example, would not look amiss in a modern shop display.


With acknowledgements to John Dillon's post on the Medieval Religion discussion group
Posted by Once I Was A Clever Boy at 18:53