St Thomas of Pontefract in the Sellers Hours


In the collections of the Bridwell Library in Dallas in Texas may be seen a further example of the cult of St Thomas of Pontefract in what is now referred to as the Sellers Book of Hours - Bridwell MS. 13. Therein is depicted the beheading of Earl Thomas:

Hours of the Virgin, Execution of Thomas of Lancaster, 141v-142r.

There is a larger version here: 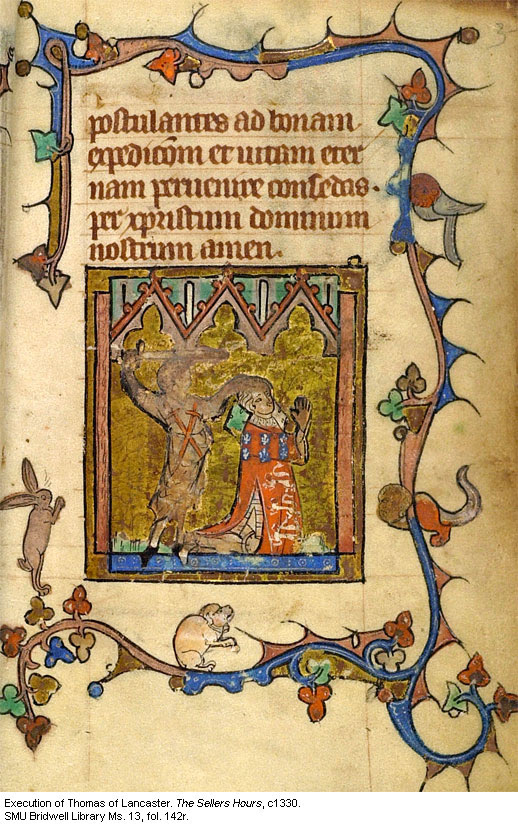 A Book of Hours according to the Use of Sarum, it was produced in France, probably at Saint-Omer, circa 1330 for an English patron.

The illuminated manuscript is on parchment and consists of 164 leaves, 10 x 6 cm., and written in a single column of 15 lines with a textblock of 5.5 x 3.7 cm. It is now bound in eighteenth-century Flemish red gilt morocco.

The script is gothic textura in brown ink, frame ruled, with ample margins. Some rubrics are written in Picard dialect. The Calendar is illuminated with illustrations of the signs of the Zodiac and the Labours of the Months.

The prayers to Thomas, Earl of Lancaster (d. 1322) serve as a testament to his cult in the fourteenth century. In the manuscript, as with the paintings in South Newington church, Thomas appears to be paired with St Thomas Becket, which suggests that they were associated in the popular mind as, perhaps, defenders of liberty against an authoratorian government.

The manuscript contains a late fourteenth-century mnemonic in English for remembering the number of days of the months is possibly the earliest record of this rhyme.