Last Tuesday the Oxford University Heraldry Society had an illustrated lecture from Steve Slater on the insignia of the Officers of State, Court Officers and members of the Royal Household, illustrated by his own pictures - in several instances of pieces of insignia which are rarely seen or documented.

The best known is that of the Earl Marshal, a gold baton tipped in black, the top bearing the Royal arms, the base those of the Marshal. This is prescribed by King Richard II in his grant in 1397 of the office, and a fee of £20 per annum to the first Duke of Norfolk. The current baton can be seen at Arundel Castle.

The Earl Marshal is entitled to bear a representation of two such batons crossed behind his arms, and a Deputy a single baton behind his arms as a bend; this was the custom in the period before 1829 when the Catholic Duke had to appoint an Anglican relative to deputise for him, and also in more recent years when a member of the Howard family has served in the capacity of a Deputy. 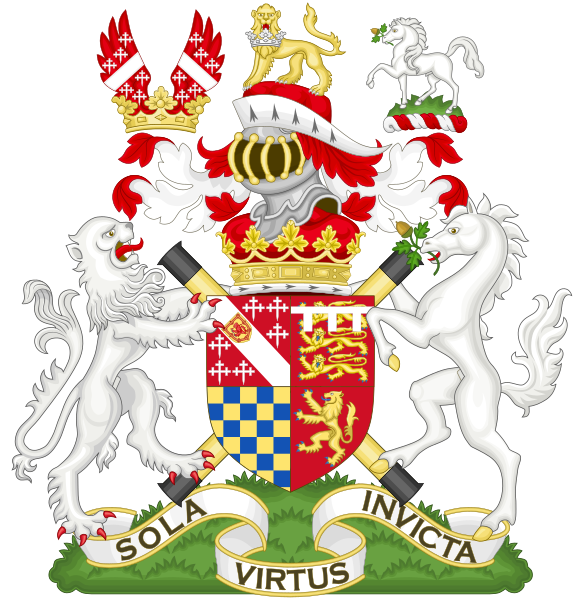 The arms of the Duke of Norfolk
The Earl Marshal's baton can be seen behind the shield.

Image:Wikipedia
In addition to the baton as prescribed in the 1397 grant are more elaborate examples such as this:

Image : His Grace The Duke of Norfolk, Arundel Castle / The Bridgeman Art Library
Also entitled to a ceremonial baton is the Lord High Constable of England, the seventh of the Great Officers of State, ranking beneath the Lord Great Chamberlain and above the Earl Marshal. Since 1521 this office is only appointed for the Coronation and retained by the grantee until their death. The baton carried by Viscount Alanbrooke in 1953 can be seen with his other honours at the Royal Artillery museum in Woolwich. It was clearly modelled on that borne by the Duke of Wellington at the Coronations in 1812,1831 and 1838.

In Scotland the Earl Marischal's title was forfeit through adhesion to the Jacobite cause, but there is still the Lord High Constable of Scotland, an Officership of State hereditary in the family of the Earl of Erroll. The baton is silver, tipped in gold, and is borne behind the shield of arms in saltire two Batons Argent tipped Or 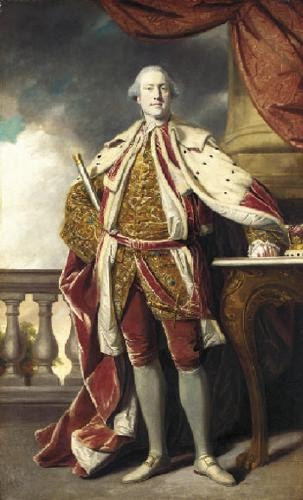 The 15th Earl of Erroll (d.1778) holding his baton as Lord High Constable of Scotland

Image:clanhay.org
Another part of the achievement of the Earls of Erroll, and flanking the shield, are a pair of armoured arms protruding from a cloud and brandishing a sword. This is shown in some representations and was used as a badge by the late Countess of Erroll. In Spain the same feature appears on the achievement of the Dukes of Alba as Constables of Navarre.

From 1801 the Lord High Constable of Ireland, had a place at the Coronations until 1911 but the office was abolished (or perhaps not filled again) after the creation of the Irish Free State in 1922.

As with the English post its potential as a centre for armed resistance to a centralising monarchy led to its disappearance or neutralisation in other European kingdoms, as in sixteenth century Spain or in Sweden where the riksmarsk, commonly rendered as Lord High Constable of Sweden in English goes into desuetude in seventeenth century
Alongside these batons are the White wands of the Lord Great Steward and Lord Great Chamberlain, the Lord Steward and the Lord Chamberlain and their deputies. That of the Lord Great Chamberlain can be seen at the State Opening of Parliament, and those of the Lord Steward and the Lord Chamberlain and their deputies are carried on Court occasions.
Today they are made of holly wood - it does not warp unlike ivory which was once used - are are made with a silver screw attachment so that they can be symbolically broken at the end of a term of office and the pieces given to the outgoing office-holder. Ceremonially they are broken at the funeral on the Monarch in this way.

The Lord Great Chamberlain and the Lord Chamberlain also have as insignia a symbolic gold key, worn on their hip on a Garter blue bow. This is documented in 1808 as established practice, and can be seen on earlier portraits. Mr Slater showed one of Sarah Duchess of Marlborough wearing such insignia as Mistress of the Robes. When she, together with her husband was dismissed in 1710, it was with trepidation that the Duke approached his formidable wife to retrieve the key, bargaining with Queen Anne for more time to persuade his wife. The Queen was unrelenting, reduced the time limit and in the end the Duchess hurled the key across the room and her husband, who pulling it out of the panelling where it had lodged, fled back to return it to the Sovereign.

In Scotland the Hereditary Master of the Household is the Duke of Argyll, whose baton of office, topped with the lion sejant Royal crest is a very handsome replacement of the precious one, lost in a fire at Inverary Castle.

Amongst the other insignia in his slide presentation was the Gold Stick of the officer of that name, a post created by King Charles II in 1678 for an immediate attendent officer of his Life Guards. Amongst the badges was that of the Marshal of the Diplomatic Corps, which was an elegant crowned oval, which swivels, one side showing an arm bearing an olive branch, and on the other ana rm brandishing a sword. There is a theory that this side was displayed when the Marshla had teh responsibility of escorting hostile embassie out of the country when war had broken out.

The batons given to Field Marshals and those occasionally awarded, at the Monarch's discretion, to Admirals of the Fleet derive from those of the French Naoloeonic armies. Following the Battle of Vittoria in 1813 the Prince Regent decided to award them to Field Marshals, and the senior service put in a claim. So in 1821 two naval batons were made for Earl St Vincent and the Duke of Clarence (later Lord High Admiral and eventually King William IV). This latter survives and was shown in a photograph, covered in blue rather than the red cloth used for Field Marshals. As Lord High Admiral the Duke, like Prince Philip today, would be entitled to be accompanied by the Lord High Admiral's Verge, which is kept at Portsmouth, and is a tall silver ornamented stave of office.

Stevel Slater paid tribute to the co-operation he had received from members of the Royal Household in building up his collection of photographs and his research into this aspect of our ceremonial heritage, and his lecture was a very suitable topic in this Jubilee Year.