Last night, thanks to the generosity of a friend, I was at a concert at that great monument to nineteenth century Oxford Tractarianism, the church of St Barnabas in Jericho. The performers were The Cardinall's Musicke, and their programme of music for Easter, largely by the Catholic composer William Byrd (c.1540-1623). 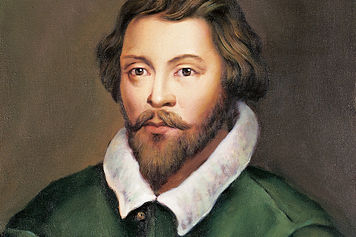 William Byrd
Image:cccmusicpages.blogspot.
I was struck by the purity of voice, combined with a warmth of sound, in the performances. The first part was Byrd's Four Part Mass, and, after the interval, other pieces by him, including his setting of the Vespers of Easter Saturday, which were sung at the end of the Easter Vigil, and a setting of In Exitu Israel . This was a work produced in collaboration with two other Chapel Royal singing-men, John Sheppard and William Mundy, and one of his earliest compositions. Sheppard died in 1558 and it is thought taht this settimng may well have been written for Westminster Abbey during the Marian restoration of Benedictine life there. The alternatim psalm was sung during the procession to the font at the Pascal Vigil in the Sarum Use.

This was a beautifully sung concert and rich in both meditative and historical reflection. Byrd is proving popular at Ordinariate Masses to illustrate both continuity/patrimony and also what was under attack in the lifetime of Byrd and his contemporaries. A fine evening.