Celebrating the Annunciation with the Ordinariate


Having attended and communicated at the lunchtime EF Mass at the Oxford Oratory yesterday I decided to attend also the Solemn Mass offered by my friends at the Oxford Ordinariate Group at the church of the Holy Rood in the evening. I had been unable to join them last week for a similar Mass for St Joseph, but I made the (relative) effort to go and was impressed by what I found.

This was a Mass celebrated in a style Mgr Burnham and his group are developing which appeals to a wider congregation than just the members of the Ordinariate as such. So we had the novus ordo in English, but with the Latin propers from the Gradual sung by the members of the Newman Consort, and with congregational participation in the Missa de Angelis.

This worked very well as a liturgical style, and coincides with my sense that Anglican patrimony is more about how you do things than sticking to the BCP or specific, legitimised, Anglican forms, and that such developments can assist the wider Church.

It also worked well in the spare, austere interior of Holy Rood. In many ways it is far too plain as a church for my taste, but it has in that austerity and in the relief behind the altar of Christ in Majesty, a hint of the Romanesque. Add to that plainsong and lashings of incense, and you have a very prayerful setting for dignified, serious, liturgy.

With that in mind, and as it was the Mass Rorate, it seems not inappropriate to illustrate this post with this illustration and accompanying description, courtesy of John Dillon and the Medieval Religion discussion group: 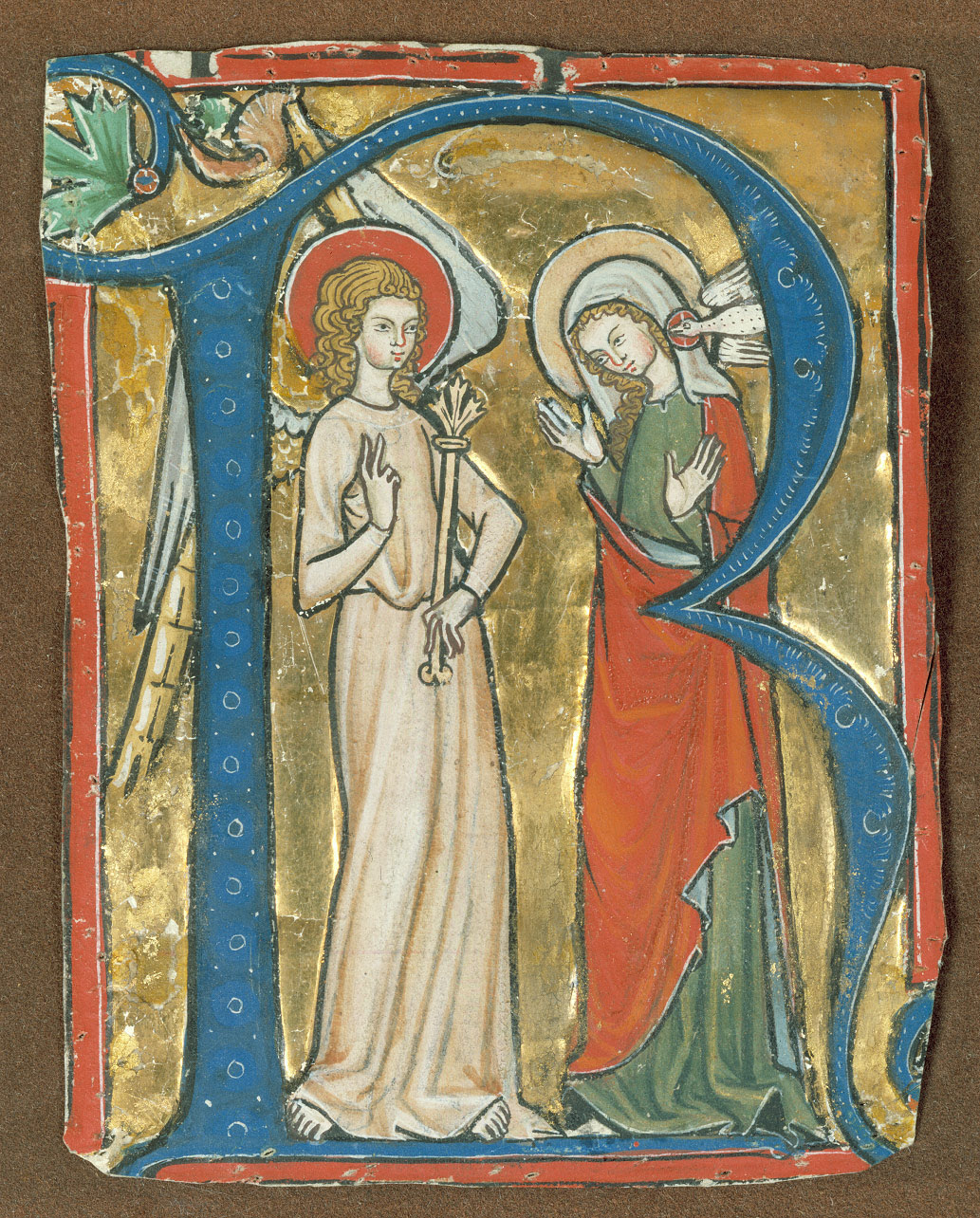 The Initial R, with the Annunciation, from a Gradual, ca. 1300
German. Probably made at the convent of Sankt Katharinenthal, Lake Constance.

Protected by the arching curve of the blue-and-white letter R, the standing figures of the archangel Gabriel and the Virgin Mary are set against a burnished gold background.

The barefoot Archangel wears a simple salmon-colored tunic, belted at the waist, and holds a staff. His right hand raised and his wings outstretched, he addresses the Virgin Mary, who stands before him and lifts both hands as the dove of the Holy Ghost whispers in her ear.

The letter R is the opening of the Introit Rorate caeli de super (Drop down dew, you heavens, from above), sung on the Feast of the Annunciation, to celebrate the Archangel Gabriel's announcement to the Virgin Mary that she would be the mother of Jesus.

The cutting was once part of a gradual, a book containing the choral parts of the Mass. It was probably painted about 1300 by the Dominican nuns at the convent of Sankt Katharinenthal on Lake Constance.