The Duchy of Cornwall


Today is the 675th anniversary of the creation of Edward of Woodstock, the eldest son of King Edward III, as first Duke of Cornwall in 1337. It was not until 1343 that he was to be created Prince of Wales. With the creation of the Dukedom in 1337 there begins the story of the Duchy, with its unique pattern of descent as a title. In the prevuious century the Earldom of Cornwall had been held by Richard, the younger brother of King Henry III and by his son, and King Edwaed II had bestowed it upon Piers Gaveston (d.1312).

There is an article about the Duchy and its particular rights and privileges here and one about the Dukes here. 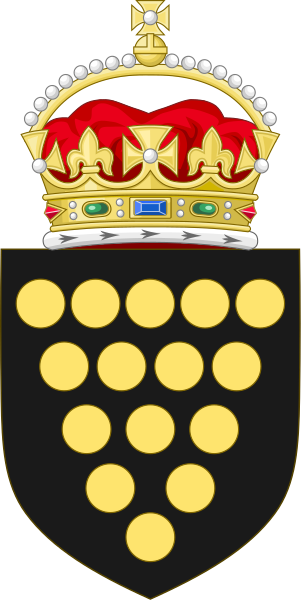 The arms of the Duchy of Cornwall.
The fifteen bezants have been borne as arms since the fifteenth century.
The coronet is that of the Prince of Wales, and was assigned by King Charles II at the Restoration.