Last year on this day I posted St Thomas of Pontefract about the cult that developed around Thomas Earl of Lancaster who was executed for rebellion on this day 690 years ago at Pontefract following his defeat at the battle of Boroughbridge. Devotion to him certainly continued at Pontefract until the sixteenth century. I would point readers back to that post before reading this fresh post about his cult.

In that previous post I illustrated the remains of a wall painting at South Newington in Oxfordshire which depicts the martyrdom of St Thomas of Pontefract and pairs it with that of St Thomas of Canterbury. The pair of paintings are an addition to the cycles that were already in the church, and points to Lancastrian influence in the area after 1326 and the downfall of King Edward II.

There is an online account of both paintings here, and I highly recommend a visit to this very intersting church and its impressive and substantial remains of medieval wall painting. 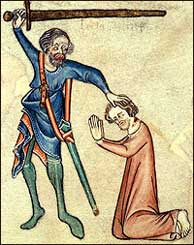 I have now found on the internet this picture, which appears to be an attempted reconstruction of the painting as it may once have appeared to the parishioners of South Newington.

For some reason the figure of Earl Thomas has been reversed, and the relative postions of the figures would definitely handicap the executioner ("a villein of London"according to a contemporary account.)