Were today not Sunday, and were it not also the feast of Bl.John Henry Newman, we might well be observing the feast of St Denis and his companions, protomartyrs of France.

His burial place is, of course, the great basilica of St Denis north of Paris, the burial place of French Kings and their families, and often presented as the first gothic church. Despite the appalling sacrilege committed there during the French Revolution and the drastic restoration by Viollet le Duc in the nineteenth century it must surely be one of the most evocative, moving buildings in France. I have only seen it in the distance, driving past on the motorway, but that was enough to make the hairs on the back of my neck tingle.

The west front of the Basilica.
The medieval north-west tower and spire were demolished during the mid-nineteenth century 'restoration' of the building.

Devotion to St Denis was reflected in the art of medieval France. Here is a suitably gruesome image of his death, commissioned by Duke John the Fearless of Burgundy for the Charterhouse at Champmol in 1416. 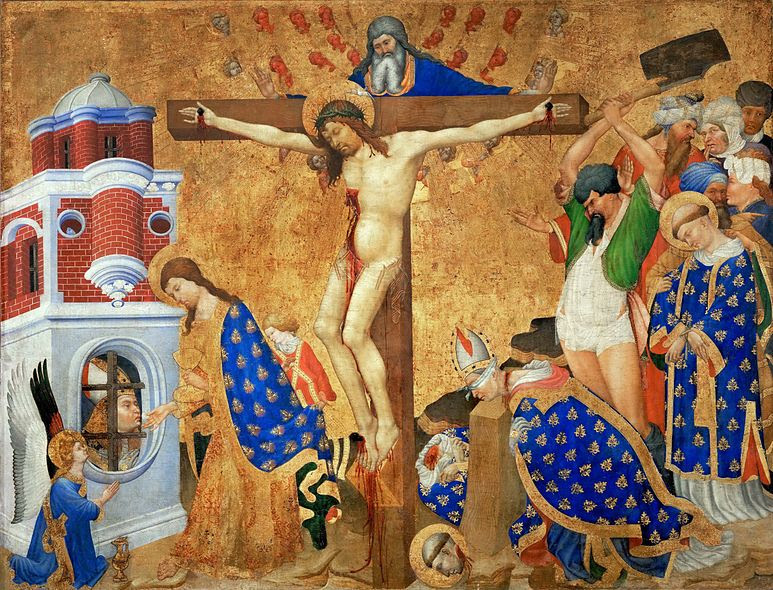 The Last Communion and Martyrdom of St Denis
Henri Bellechose, 1416
The Louvre

Closer to my own home one of my favourites amongst the historic churches of York is St Denys in Walmgate. It is rather off the tourist route, on the wrong side of the River Foss, and when I used to visit it was not open to the casual visitor - you had to seek out the key holder. As the link above indicates it is only half the size it once was and has lost its spire, but within is some wonderful medieval stained glass, including a fine fifteenth century figure of the patron in cephalaphoric mode in the east window.

There is more about the glass by following the link on the parish website. Also in the church is the indent of the brass to the third Earl of Northumberland, killed fighting on the Lancastrian side at the battle of of Towton in 1461. The York inn of the Percy Earls of Northumberland lay in the parish. If you are in York I do urge you to seek out this fascinating church.

Saint Denis is, as I discovered quite recently, certainly well worth a visit. The ambulatory IS light-filled and the usual hyperbole about disolving walls is actually true. Its reputation as the birthplace of the gothic is, perhaps, something of an exaggeration born of Suger's two books but it was surely influential.