Today is also the feast of another saint associated with Yorkshire - St John of Bridlington who died in 1379.

This Oxford-educated Yorkshireman also known as John Thwing or Thwenge, from the village of his birth, was a canon regular at Bridlington Priory in the coastal section of his native Yorkshire Wolds, where he rose to be cellarer and then prior. He was recognized locally for his holiness and after his death miracles were reported at his tomb. His first Vita (BHL 4355) was written before his canonization in 1401.

Writing that it strikes me that it is St John rather than St Thomas of Hereford, canonised in 1320, who was the last English-born conessor to be raised to tha altars by the Church before Bl.John Henry Newman. the fact that St Thomas was cited as such points to the loss of the cult of St John from other than very local perception or the interests of medieval historians like myself - very much Jonathan Hughes' Pastors and Visionaries and Eamon Duffy's The Stripping of the Altars territory.

There is also an early account in Middle English, the Verse Life of John of Bridlington. A rhymed Latin poem of perhaps contemporary political import, the Vaticinium Roberti Bridlington, circulated under John's name and could conceivably be his (George Rigg thought so in Speculum 63 [1988]; Michael Curley in the Oxford DNB seems less willing to entertain the possibility). That Oxford DNB life can be read here.

He was a popular figure in fifteenth century English devotion amongst both the Lancastrian royal house and at a more popular level. Amongst surviving depictions of him are this one of him at the left, holding a fish, and at the right, St. Giles, on the fourteenth-century rood screen in St Andrew, Hempstead (Norfolk): 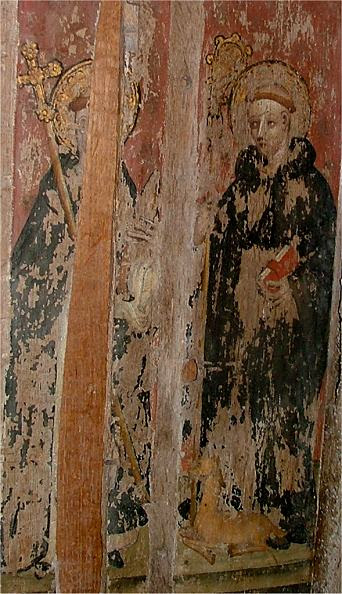 St John as depicted in an earlier fifteenth-century miniature (betw. 1401 and 1415) in the added prayers to saints in the Beaufort/Beauchamp Hours (London, British Library, MS Royal 2 A XVIII, fol. 7v):

St John as depicted in the mid-fifteenth-century east window (between 1447 and 1464) of the Beauchamp Chapel, in the Collegiate Church of St Mary, Warwick: 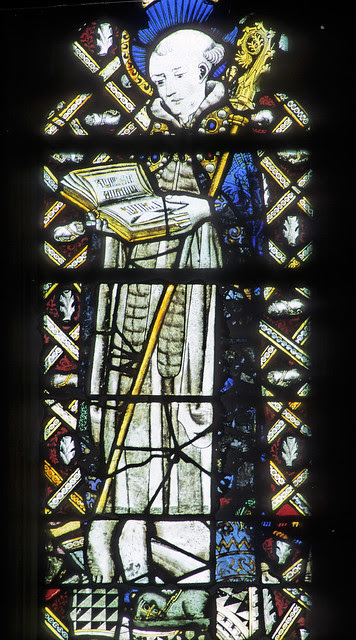 In the latter two examples there appears to be some similarity in the depiction of St John's face and hair, which may indicate a continuing tradition as to his appearance in life.

Adapted and extended from John Dillon's post for today on the Medieval Religion discussion group.

A very interesting entry on St John of Bridlington!
I am just completing a short book on him, his Life and Legacy, and am seeking funding and a publisher.

I am interested in his Life & Legacy. If ever you do find a publisher, I would be thrilled to buy a copy of the story of John de Thwing. Let me know!

St John of Bridlington, His Life and Legacy will be published on 1 January 2013. Author John Wardle, publisher John Eckersley. It will be available from Amazon.
jawardle27atbtinternet.com

I just bought your book, and am eagerly awaiting Amazon to ship it to me.
Thanks!