Last Monday evening I went up to London to the Anglo-Catholic History Society autumn lecture by Fr James Pereiro on "Manning's Intellectual Journey" at St Matthew's Westminster, and about which I posted in Lecture on Cardinal Manning on October 10th. 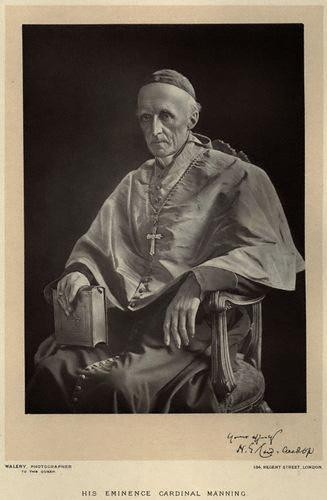 Image: Idle Speculations
Unfortunately I was delayed on the coach and missed the first few minutes, but the lecture proved to be erudite and elegant. I made some notes, but cannot hope to convey at all adequately all that Fr Pereiro said. Both from what he said and from a partial reading of his Cardinal Manning An Intellectual Biography Oxford UP 1998, and essentially reissued as Cardinal Manning: From Anglican Archdeacon to Council Father at Vatican I by Gracewing of Leominster in 2008, it is clear that Manning repays study. 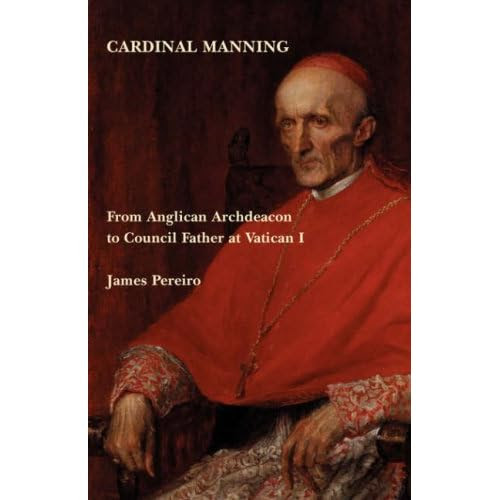 I would recommend readers to go to these, but here are a few points which struck me as salient.

What emerged was the coherence and consistency of his ideas over his long and remarkable life and career. His journey was parallel to that of the Oxford Movement rather than part of it, despite its closeness, and his time as a student at Balliol. In particular he was concerned with the fact that Christianity is fideistic, publically expressed in The Rule of Faith, published in 1839 from a sermon he preached in Chichester Cathedral.
Manning stressed the role of the Church as the Mystical Body of Christ, an idea which Fr Pereiro thought appealed to only the Anglo-Catholic wing of the Church of England and which did not become widely appreciated in the Catholic Church until the pontificate of Pope Pius XII in Catholic Church.
Lavington in Sussex with the church be created there was his Littlemore, and has the graves of his wife and other relatives, and was clearly a place and time in his life that he loved. 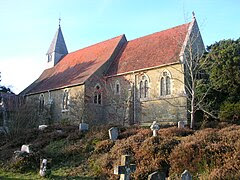 West Lavington Church
Built by Manning and consecrated by his brother-in-law Bishop Samuel Wilberforce in the autumn of 1850, just before Manning resigned and was received as a Catholic in 1851

Image: Wikipedia
As Archdeacon he expressed courteously, but firmly, his dissent on occasion from his more latitudinarian Bishop. Towards the end of his Anglican years he published four volumes of sermons, and of these Fr Pereiro thought the masterpiece was the last published just at the time of Manning's conversion - he resigned at the end of 1850 and was received as a Catholic on 6 April 1851. As a result it was largely ignored by Anglicans whom he had left behind and by Catholics as the work of someone who had been out of communion with them when he wrote.
In pursuit of an understanding of the basis of faith and belief he denied the arguments for sola scriptura as believers had faith before the creation of the New Testament canon. It would be like claiming there was no Church before the Councils - one would not claim there was no Church before Nicea in 325. In later life in the years around 1870 he became ware of the German historical school, led by Dollinger, which sought to make an historical case the basis for determining truth. Manning saw only too clearly thatthe work of historians is based on revisionism, and that certainly did not provide the certainty faith requires.
In seeking how to determine what was the guarantee of faith he found a key concept in the work of the sixteenth century Spanish theologian Melchior Cano who wrote of the agreed consensus of the Fathers as to esrtablishing the truth. For Wiseman this was the equivalent of the impact on Newman of Wiseman's 1839 quotation as to how one can judge securely. It took him longer than Newman to appreciate the concept of the development of doctrine, and he struggled at times to reconcile this with the summary of Vincent of Lerins.
Manning held that the impress of Truth led to the believer being justified by baptism. Thus even those outside the formal structure of the Catholic Church who responded to the call of Faith were responding to the Truth given by the Spirit, and that Truth is Christ. This he considered he had seen in the lives of those he receive dinto the Church, and it was a position he defended at Vatican I. In a sense therefore the seemingly Ultramontane hardline Manning is revealed as more 'ecumenical' than his postumous reputation might suggest.
As an Anglican he saw a Church of England which denied the infallibility of the Church, and asked himself and his readers if it could be recovered? His answer clearly was that it could not, and his previous experiences can be seen as ones which led him to be an advocate of the decree on Infallibility in 1870.

His move towards Rome took him time - on that charged anniversary day November 5th 1843 he had preached an anti-Papal sermon in St Mary's in Oxford which was sharply critical of the Romeward trend of others - such as Newman - whom he saw as betraying their responsibilities to the Church of England. He did admittedly go the next day to Littlemore to see Newman and explain his position, and was not granted a meeting.

His own conversion was a threefold choice, an exercise of his own private judgement, and shaped by the appointment of R.D. Hampden to the see of Hereford, the Gorham judgement of 1850 and
the re-establishment that autumn of a Catholic hierarchy, which clearly was proceeding on the basis of an authentic tradition of received Faith.
In the 1840s he was keen to maintain the role of the Church in Education, and feared the secularism that the state might bring to this sphere. In that sense he was perhaps prophetic. As a friend pointed out to me Manning never took state money to assist Catholic schools, unlike the policy adopted under his successor at the time of the 1903 Education Act.
Manning knew the world of politics without being worldly, and sought to make his opinion sknown to his Oxford contemporaries who went on to high public office - notably Gladstone. Fr Pereiro said that four volumes of correspondence between them have been prepared for publication. For a time the correspondence was interrupted by the row over Infallibility in 1870 and the years that followed. That same year of 1870 saw the publication of Disraeli's novel Lothair with Manning depicted as Cardinal Grandison. (Was Disraeli acquainted with the life of the great fourteenth century Bishop of Exeter?)

As Manning was himself aware as man of ability he rose within the Church of England, and rose further and higher as a Catholic. In that sense he is a classic example of how members of an elite always find their place within societies. 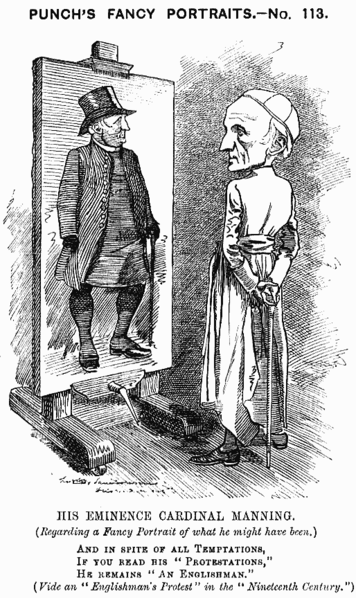 In addition to Fr Pereiro's book I would recommend as a life of Manning Robert Gray's Cardinal Manning: A Biography, published in 1985, which seeks to redress the unfavourable portrait created by early biographers and refracted through Lytton Strachey's Eminent Victorians.

I came away from the lecture better informed and keen to read more by the speaker, and with a renewed sense of the stature of Manning as a theologian and thinker.