Whilst I was churchwarden at St Thomas the Martyr here in Oxford the church was linked in a single benefice with the church of St Frideswide in the Botley Road. As today is the feast of St Frideswide and I recently found this drawing of the proposed design I thought I would post about it.

St Frideswide's originated in the remarkable ministry of the great Canon Thomas Chamberlain as vicar of St Thomas the Martyr from 1842 until 1892. Concerned that the Nonconformists might establish a foothold in the community that had been built on Osney Island in the western part of his parish he built a mission church which was replaced, largely I believe at his expense and indeed impoverishment, by St Frideswide's, and a separate parish established.

The church as it stands was designed by S.S. Teulon (1812-73) and built between 1870 and 1872.There are biographies of this interesting, if not particularly well-known, architect here and here. Presumably following his death the Oxford architect Harry Drinkwater (1844-95), of whom there is a biography here, built the vicarage including the connecting corridor which links it to the church and is a feature of interest and character.

In 1878 Drinkwater produced this design to complete the church with an impressive tower. I was given to understand that the reason this was not carried out were concerns about the weight involved given the position of the church close to the Thames. This is borne out in the picture below from the floods in 2007. Nevertheless this is another instance where one very much wishes it had been possible to complete the building as designed. 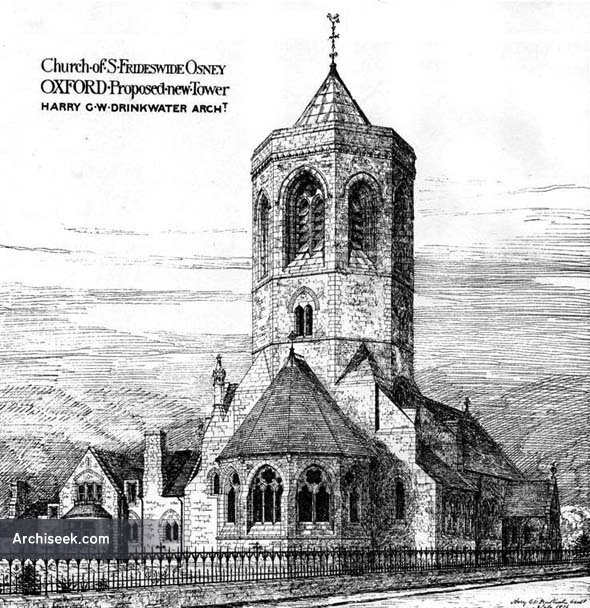 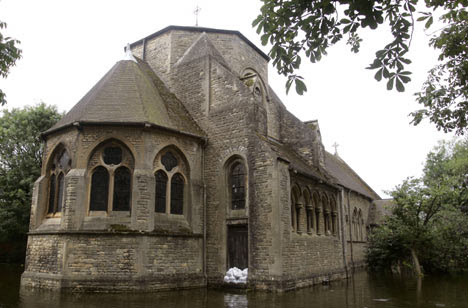 St Fridewide's during the summer floods of 2007.

Image: Daily Mail
The church is handsome, and solemn in a rather severe way both inside and out - not so much beautiful as substantial.

Inside the church is a wooden door from the only other nineteenth century church dedicated to St Frideswide. The church, in London, was bombed and destroyed in the Second World War, but the door, carved by Alice Liddell, Alice of Alice in Wonderland, with the story of St Frideswide, was rescued and found a home in her other church.