Today has been the feast of the translation of St John of Beverley. St John, a former Bishop of York, died on May 7th 721, and was buried in the monastery he had founded at Beverley. 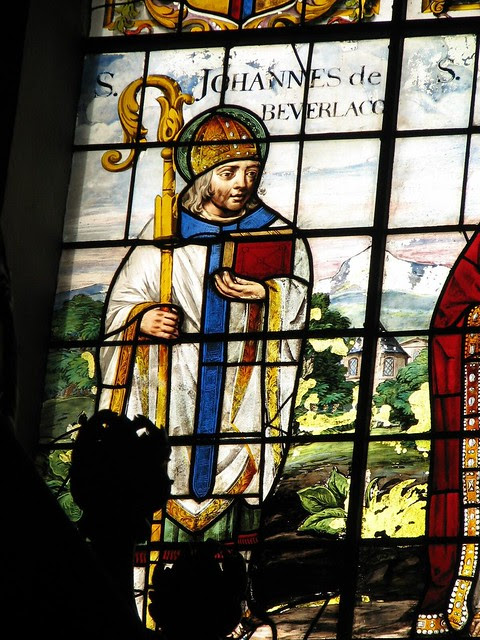 St John of Beverley.
Early sixteenth century glass in the chapel of The Queen's College,Oxford.
The figure was re-set in later glass when the chapel was rebuilt in the early eighteenth century.

The church, or more particularly, St John himself, at Beverley received great benefactions from King Athelstan in the 930s, and the saint and king were often depicted together in and around the Minster. It was at Beverley that in 1037 at the time of his formal canonisation (or perhaps a recognitio) his relics were translated to a new shrine, the event which is commemorated today - still his feast in northern Catholic dioceses rather than his dies natalis. His shrine church at Beverley was, in effect, a pro-cathedral within the diocese of York, served by a college of canons and with a residence for the Archbishop adjacent to it.


Just over a century later, in 1138 there is the earliest existing mention of St John's banner when Archbishop Thurstan incorporated it, with those of St Cuthbert and St Wilfrid into the standard which gave its name to the Battle of the Standard when the invading Scots were defeated.

In 1188 a fire severely damaged the minster in Beverley, and not until 1197 were the relics of the saint recovered and in the following decades the rebuilding of the church led to the creation of the present Beverley Minster, one of the most beautiful, and possibly, situated as it is off the beaten tract for tourists, one of the least known of the great churches of medieval England. 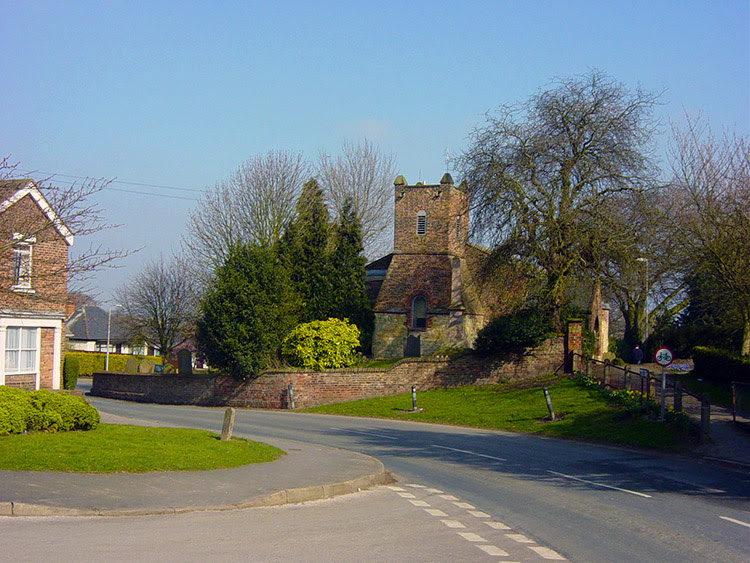 By 1266 it was accepted that when levies from were made in Yorkshire for the royal army, it was sufficient for Beverley to send one man with the banner of St John. In 1292 a new shrine was commissioned by the Chapter. An extant contract between Roger de Faringdon and the Canons of Beverley specifies


"a silver-gilt shrine, made from gold and silver supplied by the Chapter, 5 feet long, 1 foot wide. Of proportionate height, beautiful, and adorned with plates and columns in architectural style with figures everywhere of size and number as the Chapter determine, and canopies and pinnacles before and behind, and other proper ornaments. Roger to remake any figure at the whim of The Chapter. The pay to be silver equal to the weight used before gilding. Roger may not undertake any other work before completion."

On 25 October 1307 John's relics were translated to the new tomb. The new shrine is usually stated to have been elevated on the top of the reredos screen behind the high altar, and not on a seperate pedestal.

King Edward I was a devotee of St John and furthered the cult, and in 1295 the King established a chantry in Beverley Minster in the saint's honour. In 1301, he gave 50 marks towards the building of the shrine and he also diverted half of a fine owed by the town to the same purpose and ceded the remaining half. The King visited the Minster in 1296, 1297, and 1300 on his way north to fight the Scots and took the banner of St John to aid him. The banner was also used in military campaigns by King Edward II, King Edward III and King Henry IV, and King Richard II stopped at Beverley on his Scottish campaign of 1385.

In 1415 King Henry V gave the credit for his victory at the Battle of Agincourt to the miraculous intervention of St John, the battle having been fought on this anniversary of John's translation. On the day of the battle, blood and oil were seen running from the shrine. The King made John one of the patrons of the royal household and Archbishop Chichele of Canterbury ordered that both of his feasts on May 7 and October 25 were to be celebrated throughout England. King Henry and his new Queen Katherine came to Beverley in 1420 to make offerings at the saint's shrine, as did their son King Henry VI in 1448.

It was in this period in the early fifteenth century, and somewhat earlier than had hitherto been thought according to recent interpretations, that the west end of the Minster was completed. 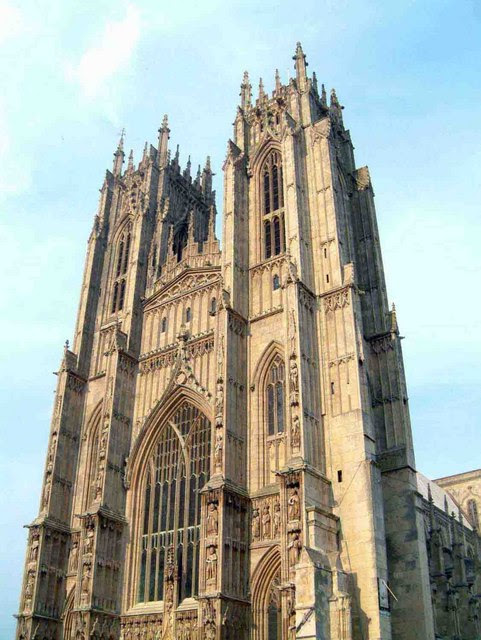 The west front of Beverley Minster.

Image:© Copyright Graham Hermon and licensed for reuse under this Creative Commons Licence.

there is more about the relationship between the town and the cult of St John in this article from the East Riding VCH volume 6. The shrine appears to have been destroyed in 1541, but in 1664 the bones of St John were discovered under the nave floor by workmen. Today a floor slab marks the grave and on May 7th each year a civic pilgrimage is held, together with children from Harpham, the village where St John was born. 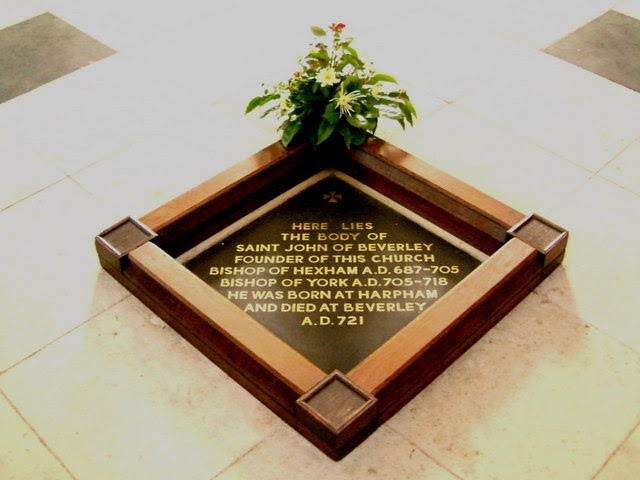 The grave of St John

Image:© Copyright Graham Hermon and licensed for reuse under this Creative Commons Licence.

With acknowledgements to the articles on Wikipedia and in the Oxford Dictionary of National Biography.