Today is Trafalgar Day, which apart from its national significance, has a particular link to a monument in my home town of Pontefract - which given the fact that the town lies well inland is both somehat unusual and also, dare I suggest, given the circumstances of the acquisition of the memorial not untypical of the town's history and character.
Filling most of the south wall of Pontefract Town Hall, built in 1785, is a plaque depicting The Death of Nelson. Set behind cast-iron railings with spear finials and lotus standards, and with an expaletory label, it shows the wounded Lord Nelson being carried from the deck of HMS Victory, and underneath it the words of the famous signal: England expects every man will do his duty.

It is in fact the plaster sculpture or maquette from which one of the sides of the base of Nelson’s Column, in Trafalgar Square, London, was cast in bronze. Four sculptors contributed to the making of the monument. Of these this one, by John Edward Carew , was the first to be installed, facing Whitehall, in 1849 and cast by Adams, Christie and Co. of Rotherhithe. 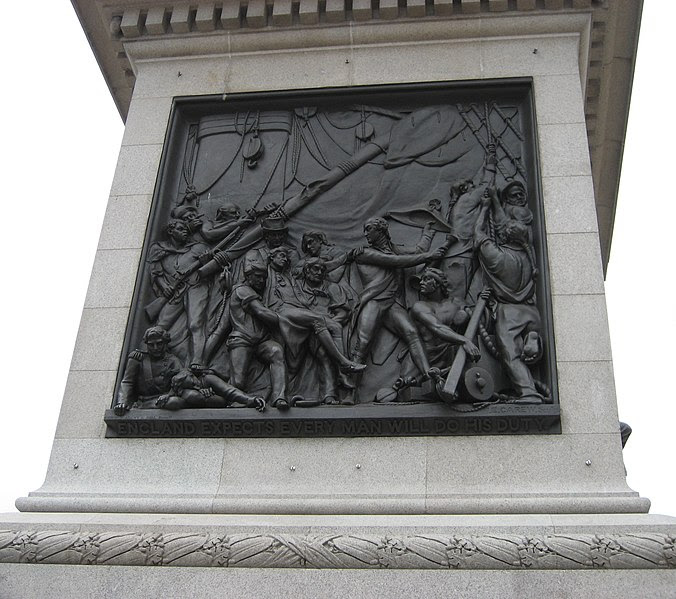 The plaque on Nelson's Column
Image: Wikipedia
I have not found a photograph online of the Pontefract plaque but I did find the image above of the finished bronze in Trafalgar Square.

Carew was a friend of Benjamin Oliveira, one of the two Liberal M.P.s for Pontefract from 1852 until 1857. The M.P. suggested to the Mayor of Pontefract that the plaque would look well in the Town Hall and show the town’s admiration for Lord Nelson. The offer was accepted and the plaque, cut, as can still be discerned into six pieces, was transported by horse and flat cart and delivered and erected in the Town Hall.
Shortly afterwards the bill arrived. The Corporation of Pontefract had been under the impression that the plaque was a gift from the sculptor and a great deal of embarrassment ensued. The bill was finally paid, but the amount was never disclosed.
With acknowledgements to my friend Barbara Stewart's blog Barbara's Web Site : family history and local history. This is a good example of how a blog can serve as an autobiography and family history and be a record for others interested in the local history of an area.