Some of them were aristocrats, such as Madeleine, Lady Dacre, whose religious opinions earned the respect of Queen Elizabeth I, and about whom Alice Hogge has written in God's Secret Agents, Lady Vaux and the other well-born ladies who appear in Fr. John Gerard's Autobiography, and Anne, Countess of Arundel, the wife of St Philip Howard. 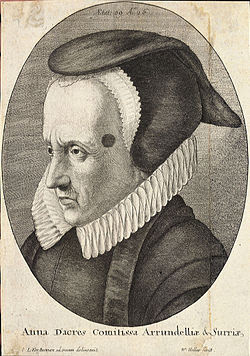 Anne Countess of Arundel in later life.
Image: Wikipedia
As women of birth and rank they were able to exercise their authority in their local communities and in some cases protect their co-religionists.
Rather different was the story of the York housewife St Margaret Clitherow. As a regular visitor to York I have known her story virtually all my life.

St Margaret Clitherow
Image: Sacred Destinations
Here is an account of her life which I have adapted from that given by Terri Morgan on the Medieval Religion discussion group on March 25th this year - St Margaret's feast day.
Margaret was a native of York, the daughter of a prosperous candle maker. She married the butcher John Clitherow in 1571. A few years after the marriage, Margaret converted to Catholicism. She became notorious for her recusancy. Her husband was repeatedly fined because Margaret would not attend the services of the Church of England. She was even imprisoned for two years - and on her release set up a Catholic school. She even sent her oldest son to Douai to study, for which she was put under house arrest for over a year.
Margaret was also a prominent hider of fugitive priests. In 1586 her house was searched, and a missal and Mass vessels were discovered. She was arrested and put on trial, but she refused to plead so as to protect those she had helped. She refused to enter a plea, so was sentenced to the peine fort et dure (laid on the ground with a door over her, with a sharp stone under her neck, and then weights added to the door until she should finally answer the courts with a plea) which was carried out in the crypt of the despoiled chantry chapel of St William on Ouse Bridge and so died, refusing to speak.
By not entering a plea meant there was no trial at all. She thereby saved her children, her stepchildren and her neighbour’s children from being hauled into the witness box and being bullied into giving the evidence to condemn her. (There was no minimum age for giving evidence and no protection for minors). This evidence would have pointed to other Catholics in York. By keeping silent she sabotaged the entire anti-Catholic clampdown and gained the moral high ground in popular opinion - even among the extreme Protestants in the neighbourhood. This was of course not only at the price of her own life but the life of her unborn - and unbaptised - child. Has she pleaded (guilty or not guilty would have made no difference) and been found guilty then her execution would have been deferred until after the child's birth. It was an even harder choice that it looked at first.
Visitors to York can see the house in the Little Shambles where she lived for some time, and the dormer window at the Black Swan, which she hired as a Mass-house. You can also see her hand at the Bar Convent Museum in York. 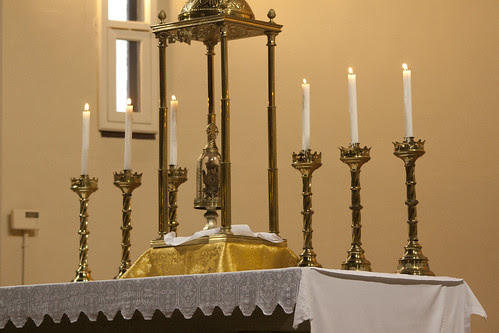 St Margaret Clitherow's hand, venerated at the Church of the English Martyrs in York on the recent Latin Mass Society Pilgrimage.

Image: LMS Chairman blog
To this I would add links to other websites about her, beginning here, and which has the interesting point that St Margaret's martyrdom appears to have arisen from an excess of zeal on the part of the local authorities, who were subsequently reprimanded by Elizabeth I in a letter - another woman faced with the same penalty was kept in prison on the Queen's orders, but the penalty not exacted, as described in Alice Hogge's book.

There are two other sites of interest about St Margaret here and here.
What emerges is Margaret Clitherow's remarkable dedication to the Catholic cause, and the fact that a woman from the middle ranks of life in York could achieve so much. She does not appear to have been dominated by her husband or social convention.
One of the priests she helped was Bl. William Hart, arrested on Christmas night 1582, apparently in her house. When he was executed in March 1583 the crowd apparently would not let the executioner draw and quarter him as he hanged - that is they ensured he was dead before he was hacked to pieces, which suggests sympathy either for him or his cause, which was not uncommon at public executions in the period. There is an account of his life here.
Another remarkable Yorkshire-born recusant woman was Mary Ward (1585-1645). She came from an old Yorkshire family, grew up in this time of persecution and was connected to some of those involved in the Gunpowder Plot. Her active life was largely lived in exile on the continent and in her attempts to establish a new type of religious order for women, the institute of the Blessed Virgin Mary, inspired by the Jesuit model. In 1630 she was imprisoned for three months by the Inquisition and her communities dispersed, and only after death did her ideas begin to find official favour in the Church. She is probably better known in the area she worked in on the continent - Germany and Belgium - than in her own country. She died in York, and the Bar Convent there belongs to her order, and includes a museum of recusant history.

There are online lives of her here and here. 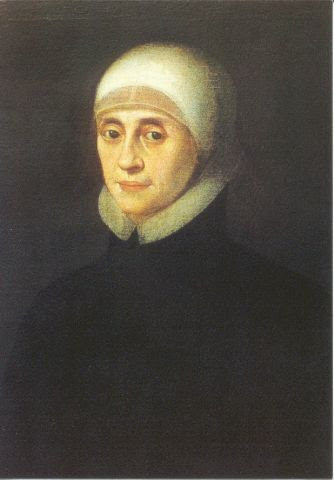 First of all, thank you very much for such refreshing approach to the subject which has until now seemed to be to be written in a very musty style. I have chosen recusant women of york as my special studies topic and wondered if you knew about an aspect of Margaret's shrine which I recently found. The shrine on the Shambles was never inhabited by Margaret or used as a shop by her husband. The house, shop and secret room are on the otherside of the street towards kings square. The council were aware at the time the shrine was opened of this and as it states in some council meeting minutes, "it is the only vacant property on the street." This I believe is confirmed in the account of her last arrest where it states someone, I am not sure who, jumped out of a window into a pigpen of colliergate. I think this would have made it logistically impossible for the house she was arrested in and lived in to have been on the back of newgate market as we are encouraged to think. I would greatly appreciate to hear any thoughts you have on the matter.