Now that it is the vacation I have a little more time to write up my notes from the Ford Lectures last term - assuming that I can read my own handwriting, which is not guaranteed, and will lead to a slightly disjointed account of a stimulating lecture.

In his fourth lecture Prof. Peter Lake began with an examination of two more tracts from 1584. 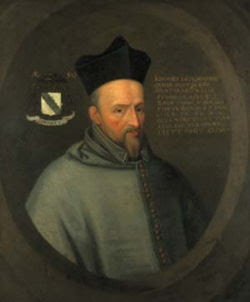 This proceeded in a moderate tone on the basis that people needed to know who the Queen's successor would be and the Stuart claim was opposed to the actions of the selfish Machiavells. A union of the Crowns would be beneficial, and avoid the potential for another War of the Roses; the line of King Henry VII must be maintained.

William Allen, who being an Oriel man is of particular interest to me, produced An Answer to the Libel of English Justice (Mons, 1584). The arms of Cardinal Allen in the Hall of Oriel

In Allen's view the disorder in political life was the result of a few who overruled the Queen against her wishes. He depicted them as athiestical Machiavells, politiques who used religion as a cover for their actions. England had become the rogue state of Europe due to the uncertainty about the succession to the Crown. The true faith had been abandoned and the true heirs abused; the line of King Henry VII must be maintained or the risk was of war. King Henry VII had rescued the nation, even though King Richard III had been an anointed monarch.

The clique around Burghley persecuted Catholics for political reasons, not religious ones. When it came to who should decide on issues of legitimacy and resistance Protestants left the decison to themselves, Catholics sought order by appealing to the Pope, whose concern was for people's spiritual welfare.

Given Allen's political manoeuvering he was being perhaps rather disingenuous, but that he could make so plausible a case indicates the fluidity of perceived opinion at the time.

Leicester was again seen as planning selfishly for himself in the event of Queen Elizabeth's death. Leicester's Commonwealth appears as disinformation to force Elizabeth to offer concessions to Mary Queen of Scots.

The government's Bond of Association to bind people to defend, or avenge if need be, the Queen was accepted widely, and those taking it included Mary Queen of Scots.

Dr William Parry, the eccentric Church Papist MP and double agent ( a "nutter", but interesting, in Prof. Lake's expressed opinion) who was tried and executed in 1585, appears to have been accepted by the Queen as an alternative voice to those in her government as a means of showing her freedom of choice as to the advice she received. Parry was both her agent and also someone who planned to kill her. As an MP he had advocated the rights of succession of the Queen of Scots and her son. Elizabeth appears to have used parry to suggest an openness to catholicism on her part. Her government began to think that she should be told not to do so.

Parry's plot gave the government an opportunity to respond and his claims were used to undermine the cause he advocated. The government sought to counter the claims of Catholic loyalism. Hence the tract the Due and Plain Duty. The official view was that all Catholics were traitors. Those like Parry must not be allowed near the Queen, which would serve to exclude the Church Papists from access. If the Queen herself could be misled by Parry, so could others. Parry claimed to have been affected by seeing the queen, seeing in her Henry VII, and both the Queen and the Queen of Scots were of the lineage of Henry VII. Parry's own divided state of minfd indicated what could happen to the c country as a whole

Revealingly at his trial Parry said he was there because he was "not settled" - which surpised the judges, but was a reference to the password Leicester's Commonwealth attributed to the coterie around the Earl of Leicester.

Whilst in the Tower awaiting execution Parry wrote of his fear of the French link, believed in restoring the Spanish alliance, and the acceptance of Mary and James VI as heirs - straight from Leicester's Commonwealth. Rescue was not on hand, with Elizabeth presiding over the regime. Blaming the situation on evil counsel was not the explanation, and therefore he had looked to kill her.

In Prof. Lake's view Robert Parsons with Leicester's Commonwealth captured the dynamics of the political situation, exercising a malign influence that affected everyone in the Parliament of 1584-5 from the Queen downwards, and confirming Parsons' skill as a propagandist.