Via the Hermeneutic of Continuity I have come across another online biography of St Margaret Clitherow which may be of interest to those who read my posts on Recusant women and the LMS Pilgrimage to York.

Image: Catholic Women's League
It is by Daniel F. McSheffery and entitled St Margaret: Mother and Martyr and can be read here.

Here is a picture of the site of St Margaret's martyrdom. 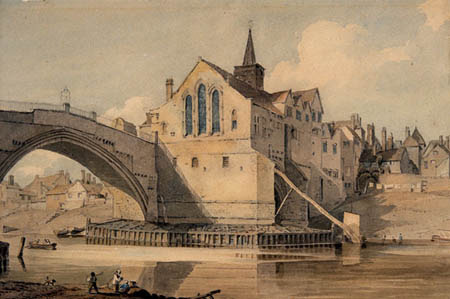 The medieval Ouse Bridge had become crowded with buildings. As well as houses and shops, the bridge supported St William’s Chapel at one end, which was transformed into apartments after the Reformation.

The thirteenth century chapel commemorated the saint-archbishop, who died in 1154, and whose prayers were believed to have saved those who fell into the river when the bridge collapsed upon his return to the city.

In the winter of 1564 snow, a frost, a sudden thaw and a flood caused the central arches to collapse again. Twelve houses fell into the river and 12 people drowned.

The new bridge, opened in 1566, had five arches, with the central one 81 feet wide and more than 17 feet high. The bridge had a chapel, St William's, on the south side of the river. The Council chamber was housed next to the chapel and the damp city gaol was below. It was one of the sights of the city.

It was in the gaol, in the basement of the desecrated chapel, that St Margaret died.

The bridge was cleared and rebuilt in the years after 1810, but a plaque marks the site of the chapel.