This morning, as in past years, I attended Tenebrae at Blackfriars here in Oxford.

This is always popular not only with Catholics but also some Anglo-Catholics in the city and the congregation was again of a good size.

The austere nature of the service fits well with the elegant but again rather austere style of the neo-Perpendicular Dominican church and it was a suitably meditative start to the days of the Triduum. The candles on the hearse and the High Altar were all of unbleached wax, rather than the ordinary type shown in this Wikipedia file photograph: 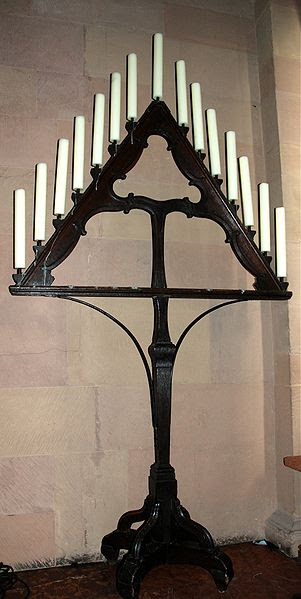 Tenebrae hearse
Being celebrated in daylight inevitably removes some of the impact the service would have had when observed the night before, but it is still very striking and well worth attending. It is one of those liturgies which could well be revived by more churches which could draw in a reasonable congregation.