The original Norman west front is similar to that of Rochester Cathedral, and shows similariries to that of Tewkesbury, although lacking the great recessed arch that is so distinctive afeature of the Gloucestershire abbey church.

To this was added the western tower. It was clearly designed to complement the central tower of 1320-40, hence the pattern of fenestration and use of ballflower ornament. Built as it was on top of the west front and clerestory, rather than from the ground, it is perhaps not altogether surprising that it collapsed - the only other similar examle in England was at Malmesbury, which suffered the same fate. The west front on the eve of the collapse.
The spirelets have been removed, the stonework appears to be in poor condition and there is what should have been a worrying crack in the masonry to the north of the doorway.

The head of the statue of St Ethelbert from the west front is said to now adorn St Ethelbert's Well in Quay St in Hereford. 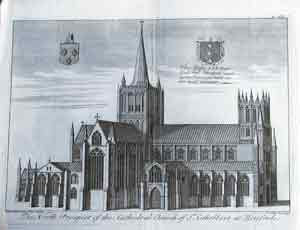 Another view from the north of 1779 The aftereffects of the collapse as depicted by I. Wathen in 1786
Image: British Library

The Dean and chapter called in the architect James Wyatt to restore the building. As a Neo-Classical architect was fine - as for example the Oriel Library of 1788. Let loose on a medieval church he showed at Hereford, even more than he had at Durham and Salisbury, all the sensitivity of a1960s town planner faced with an historic town centre. Over the decade 1786-96 he shortened the nave by a bay, rebuilt the whole of that part of the cathedral above the nave arcade, and removed the timber spire, pinnacles and parapet from the central tower. Inside the cathedral a vast amount of damage was done, including the loss of many monumental brasses, although the figure of 2 tons weight is surely exaggerated.

Not until Lewis Cottingham's 1841 restoration were the parapet and pinnacles, rather larger in the latter case than those there previous to Wyatt, but which work well, replaced on the central tower.

Wyatts' insipid west front found little favour and in 1878 Sir George Gilbert Scott produced a design in the romanesque style, that perhaps mercifully, was not carried out. In 1902-8 his son J. Oldrid Scott rebuilt the west end as a memorial to Queen Victoria. This is a much more impressive design, though the nave still remains short of a bay.

The front which collapsed in 1786 was perhaps a little awkward in its appearance, the result of piecemeal alterations and development. The current front is in many a fine piece of work, but part of me regrets that there was not the decision to reconstruct the pre-1786 design.

Hereford is a cathedral for which I have a great affection. Part of that I recognise is because I am aware of the damage it has sustained over the centuries since the reformation, but it has survived neglect and the attentions of vandals and restorers, and still presides over the city.