It occurred to me last night that in my researches on the Lenten array for my posts Passiontide veils and Lenten array and Vexilla regis prodeunt no-one appeared to make the point, which indeed had not fully dropped as a penny in my failing wits until then, that it is not just, as is argued, that the Lenten array is ashen in colour, but rather than unbleached linen is of such a texture and hue as to be reminiscent of sackcloth and of ashes, the ancient symbols of repentence. Thus it is not just a case of forswearing the use of silken hangings for the altar but of the church as a building as well as a community repenting in sackcloth and ashes during Lent and Passiontide. 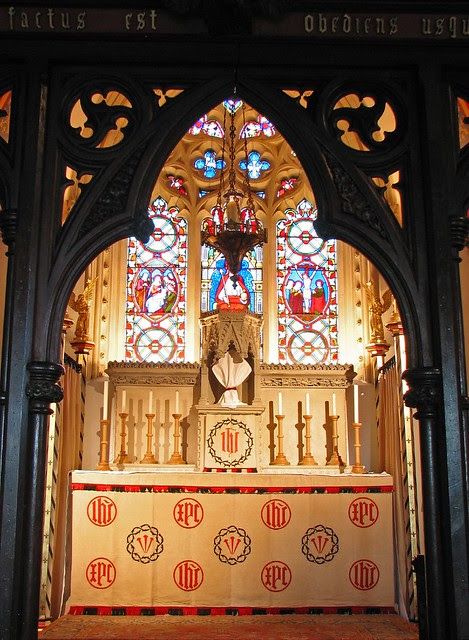 Image:Lawrence Lew on Flickr
Once the thought came to my mind I realised that I do not think I have seen the point made in print - though it doubtless has been - so I thought I would share it with anyone who might be interested.
Posted by Once I Was A Clever Boy at 10:07

Wow John this pic must have been taken ages ago - before the Rood Screen was polychromed. You can see what the Rood Screen looks like now, with the Lenten Array pulled back, here.