Yesterday, had it not been Sunday, would have been the feast, or at least the commemoration, of St Richard of Chichester. 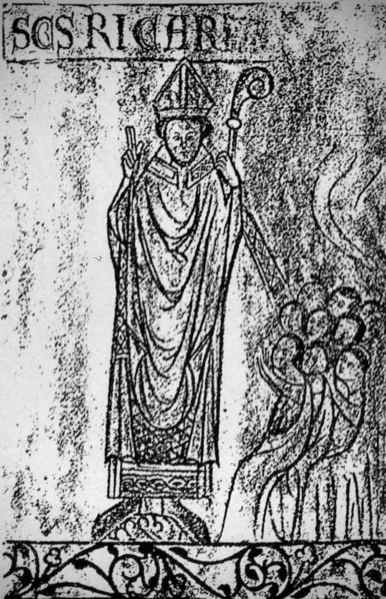 A black and white picture of the thirteenth century wall painting of St Richard
in Black Bourton Church Oxfordshire.
There is more about the church and its paintings here and here.

Image: Wikipedia
I have adapted the following piece from the post by Terri Morgan on the Medieval Religion discussion group Saints of the day feature:

Richard de la Wych, born in 1197, was a native of Droitwich in Worcestershire. He studied at Oxford and Paris, and there he lodged in the same room with two other poor scholars, and fed on bread and porridge (potagium); and so poor were they that the three had only one respectable coat between them, and could only go alternately to the lectures in the coat, whilst the others sat at home without.

He became the Chancellor of Oxford University after he returned to England from seven years of studying canon law at the University of Bologna. One of his former tutors, (St.) Edmund of Abingdon (who had become Archbishop of Canterbury), became his dear friend and, impressed by Richard's skills, made him diocesan chancellor. In the words of the Dominican Ralph Bocking, Richard's confessor and biographer: "Each leaned upon the other - the saint upon the saint: the master upon the disciple, the disciple upon the master: the father on the son, and the son on the father."

Richard was a strict vegetarian, but would serve meat to his visitors; when he saw poultry or young animals being conveyed to his kitchen he was wont to say: "Poor little creatures, if you were reasoning beings and could speak, how you would curse us! For we are the cause of your death, and what have you done to deserve it?"

The next archbishop arranged the election of Richard as Bishop of Chichester - which enraged King Henry III, who refused to allow Richard to assume his office. In the two years before Henry acquiesced, Richard lived in a priest's house and did visitations of the diocese on foot. Richard was a reformer and model bishop. Richard died in Dover on this day in 1253 while preaching the crusade. Miracles were reported shortly after his death. A commission of inquiry was established in 1256 and in 1262 Urban IV canonized him. He has two thirteenth-century Vitae, of which the second, by the Dominican hagiographer Ralph Bocking, is full of anecdotes about his solicitude for the poor and the sick.

St Richard is perhaps best remembered by the wider public today for the prayer: "Thanks be to thee, my Lord Jesus Christ for all the benefits thou hast given me, for all the pains and insults which thou hast borne for me. O most merciful redeemer, friend and brother, may I know thee more clearly, love thee more dearly, and follow thee more nearly, day by day."

There is another, longer, online biography here.

Over and above his connections with Oxford, and the presence nearby of the painting at Black Bourton, or the fact that some of my ancestors came from Sussex, I have always had an interest in St Richard because the only medieval church dedicated to him was in my home town of Pontefract. In 1256, three years after the death of the Bishop, Edmund de Lacy, Earl of Lincoln, founded a Dominican friary in Pontefract and dedicated to Our Lady, St Dominic and St Richard. According to Bocking the three-fold dedication received divine approval when the flawless foundation stone split into three pieces when the Earl was laid it. The friary was dissolved in 1538 and the the buildings destroyed. The site is now covered by Pontefract General Infirmary. Something of the plan and sequence of buildings was recovered in excavations before the hospital was extended, and as a boy I helped with those.

Many years later as a voluntary chaplaincy assistant there I suggested, and the suggestion was accepted, that the reconstructed hospital chapel be dedicated once more to St Richard. I helped provide a photographic reproduction of a pair of fourteenth century stained glass figures from the north choir clerestory of Wells Cathedral, which fortuitously shows St Richard side by side with St Giles, the patron saint of the parish church in Pontefract. This I had spotted on a visit to Wells whilst on retreat at Glastonbury.

You may be interested to know that there are some very fine mosaics illustrating the life of St Richard in the Church of the Sacred Heart and St Catherine of Alexandria at Droitwich.