On Wednesday evening I attended a most interesting talk at the Oratory here in Oxford by Julian Chadwick about the history and present role of the Order of Malta, or to give it its proper title The Sovereign Military Hospitaller Order of St John of Jerusalem of Rhodes and of Malta.

Mr Chadwick is in Simple Profession as a Knight, and, dressed in his habit and equipped with modern computer technology, symbolised the way in which the Order combines its original monastic and hospitaller charism with modern methods so as to continue to serve Christ and the Church as well as the sick and the poor.

Amongst the points he made was that the Order, founded in 1099, is the oldest chivalric order in existence, predating those of the national and dynastic monarchies, such as the Garter, the Annunziata and the Golden Fleece, founded from the fourteenth century onwards.

In England the Grand Priory was restablished in 1993, having been in abeyance since 1559, although there had been English Knights of Malta throughout that period. The previous Grand Master and the present one were both born in England. The Order is growing in numbers in this country, and this appears to be a consequence of their fidelity to their traditions.

He also indicated the wide extent of their humanitarian work, and fact that the Sovereign status of the Order enables it to work where other groups might not be accepted and to be a means of directing aid rapidly to disaster areas. 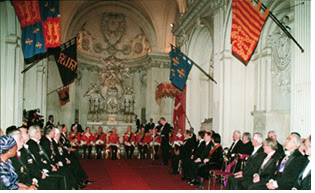 A meeting of the Sovereign Council of the Order,
with the banners of the national langues displayed

I have added the English website of the Order of Malta to the side bar, and it provides a great deal of information about the history and current activities of the Order.
Posted by Once I Was A Clever Boy at 11:54