Today, in the Roman Rite images will, hopefully, be being veiled to mark the beginning of Passiontide.
I gather there is some variation between dioceses these days, but here in the Archdiocese of Birmingham traditional practice appears to prevail. I always find the sight of the reredos of St Aloysius in Oxford clothed in violet very dignified and impressive - it has a sombre magnificence suitable to the season.

The current Roman practice is to veil in violet for Passiontide alone. The medieval English Sarum Use had veiling for the whole of Lent and in unbleached linen with stencilled decoration.

The following is edited from notes on a US Episcopalian site, fullhomelydivinity.com:

Veiling of Crosses according to the Roman Rite.

Those who follow the Roman tradition veil crosses, pictures, and statues on Passion Sunday and they remain veiled until the arrival of Easter.

Before the first Evensong of Passion Sunday‑all crosses, pictures, and images in the church (including, if practically possible, the great rood) are covered with opaque purple veils. These veils, which must not be transparent, nor bear any device or symbol, are not removed for any festival, however high in rank, which may occur during Passion week; the processional cross, however, is unveiled for the procession on Palm Sunday.

At the festal Mass on Maundy Thursday, the veil on the cross on the high altar (but no other cross) is white; and also on Good Friday that of this same cross is sometimes black, though the Roman rite itself seems to require that the altar cross and candles be taken away and the altar be left totally bare on Good Friday. Stations of the Cross are not veiled.

The spirit of the Passiontide veiling seems to be that the Church would draw off our attention from everything but Him whose suffering she is commemorating, bidding us 'consider Him that endured such contradiction of sinners.' It is also symbolical of the hiding of our Lord's glory during His earthly life, and especially during His ignominious and bitter Passion.

The Present Roman Rite. The liturgical changes of the 1960s "suppressed" the Lenten veil. In the 1975 edition of the Sacramentary, the practice was reintroduced as an option. At the end of the propers for the Saturday of the 4th week in Lent we read: "The practice of covering crosses and images in the church may be observed.... The crosses are to be covered until the end of the Lord's passion on Good Friday, images are to remain covered until the beginning of the Easter Vigil."

Veiling according to the Sarum (Old English) Rite. In this tradition "according to the rules that in all the churches of England be observed, all images [are] to be hid from Ash Wednesday to Easter Day in the morning." This is called the Lenten Array and it includes a curtain which hides the reredos, a frontal which covers the altar, and veils which cover other statues and pictures in the church. The colour was Lenten white which was natural linen material, sometimes referred to as ash colour.

According to An Introduction to English Liturgical Colours, "The explanation of this use of white, which is closely akin to ashen, is 'in this time of Lent, which is a time of mourning, all things that make to the adornment of the church are either laid aside or else covered, to put us in remembrance that we ought now to lament and mourn for our souls dead in sin, and continually to watch, fast, pray, give alms....,' wherefore 'the clothes that are hanged up this time of Lent in the church have painted on them nothing else but the pains, torments, passion, blood­shedding, and death of Christ, that now we should only have our minds fixed on the passion of Christ, by whom only we were redeemed." This practice made a startling transformation of the church for the whole of the Lenten season so that Easter literally burst forth like the Lord from the tomb when the church was returned to normal state. Both the Roman tradition and the Sarum tradition, though different in colour and different in length, were about the same thing. They were about helping us to focus single-mindedly on the Passion of Our Lord.

There is an article with links to images here by fr Lawrence Lew OP from the New Liturgical Movement website.

The following five paragraphs are adapted from an article on Vitrearum's Church Art from 2009, whence also the photographs. 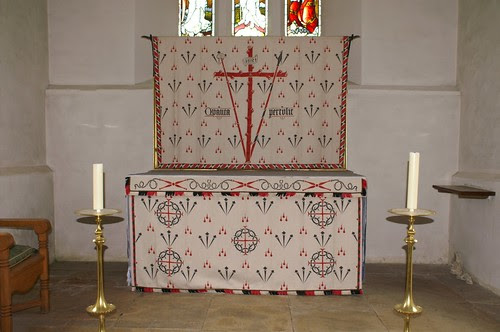 Lenten array designed by F. C. Eden at North Cerney, Gloucestershire
Until a few years ago it was fairly common to see the altars of English churches covered with unbleached linen hangings known as Lenten array. This striking custom is a medieval one and was fairly universal in medieval England.

In the Middle Ages the idea of covering altars, reredoses and images with off-white material, was to provide a visual deprivation of colour and ornament within the church building. The purpose of this was twofold. Firstly it was reflective of the contemplative character of the season. Thomas Becon, the protestant theologian, wrote about the purpose of it as he understood it:

'So likewise [in] this time of Lent, which is a time of mourning, all things that make to the adornment of the church are either laid aside or covered, to put us in remembrance that we ought now to lament and mourn for our souls dead in sin and continually to watch, fast pray, give alms etc. etc.'

Secondly the contrast between the visual deprivation of Lent, with the visual splendour of the festal hangings of Easter, emphasised the triumph of the Resurrection.

In the Middle Ages the linen hangings were usually decorated with red, black or dark blue stencilled motifs. These motifs were generally related to the Passion of the Lord, the Instruments of the Passion or sacred monograms. The coverings over images were often stencilled or appliqued with an attribute, text or even by the late medieval period a representation of the image covered.

Some statues at least were in a wooden case-like niche or housing which could be closed for Lent and then opened on Easter Day. As well as surviving examples there is a recorded incident of one such closed image of St Anne flying open when King Edward IV prayed before it in 1471, which was seen to be an augury of his military success and restoration that Eastertide.

Similarly many late medieval wooden reredoses were designed with covers to close off the image from view, and often with the Lenten face painted in grisaille or muted colours, or, as in the one by Stefan Lochner now in Cologne Cathedral, with The Annunciation on show.

A modern example can be seen in the reredos formerly in SS Philip and James and now at Pusey House here in Oxford, which when closed displays the instruments of the Passion on a linen coloured background. 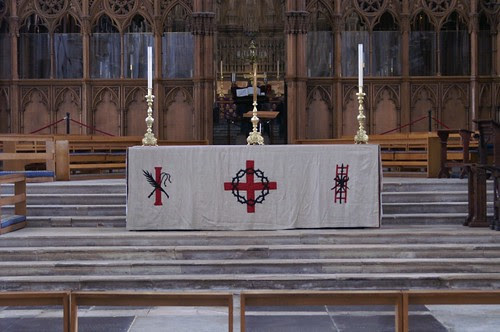 Lenten array on the nave altar at Winchester Cathedral. 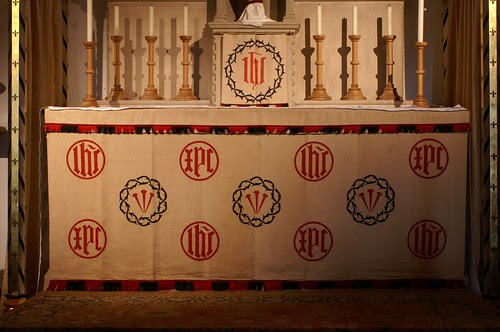 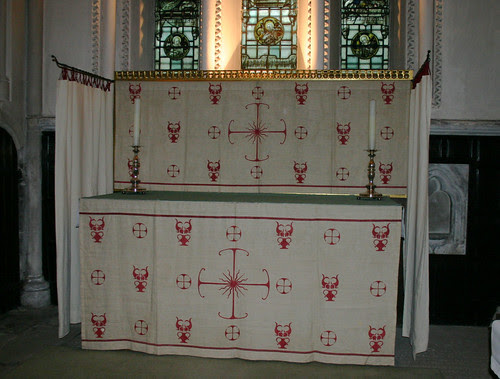 Lenten array by Sir Ninian Comper in the retrochoir of the Anglican Cathedral in Southwark .

The best account of the medieval use of Lenten array, including a large amount of documentary evidence is probably W. St John Hope and E. G. C. Atchley English Liturgical Colours (London, 1918).

Following the work of Percy Dearmer and publications such as those of St John Hope and Atchley, a revived Sarum Lenten array became accepted in many English churches and cathedrals, including Canterbury, Winchester, Wakefield, which I have seen in place, and even Westminster abbey.

Some Anglo-Catholic churches made the point of following Roman rather than Sarum usages, and that may account for the decline in Lenten arrays in recent decades as indicated by the author whose work I have used above. Certainly at St Thomas in Oxford when, as churchwarden I reinstated the custom of Passiontide veiling in 2004 - i.e. climbed up and put the veils in place myself - all the veils, some of which were quite old, were Roman purple or violet in colour.

The recovered Saruin practice may be a part of "Anglican patrimony" which can be carried forward and encouraged, as at St Birinus in Dorchester. It is the true patrimony of both Catholics and Anglo-Catholics in England - which is not to deny or begrudge the familiar purple hangings of Passiontide.

One rather curious tradition, which I think is a misunderstanding of the Lenten use of linen, and appears to have arisen with no real historic precedent, is that of having vestments also made of the unbleached linen and using them.

From the 1552 Church Good Surveys I have seen and used in research I have never come across reference to such vestments, and I suspect that they did not exist. Purple or violet fabric may have been an expensive and difficult colour to obtain, but I think it, or a substitute would have been worn by the officiating clergy. Here diocesan practice varied - if my memory serves me right from what I have read the practice was to follow the use of the cathedral - hence Exeter clergy wore purple, and those of Wells blue. Hence the revived Sarum tradition of wearing blue in Advent.

Just a minor correction needed, John. The reredos at Pusey House has now been removed, restoring the chapel to its original appearance.

Do we know why? I trust it is not a case of "false archaeology"!