Not only is today is the 85th birthday of H.M. The Queen, but being Maundy Thursday, it is also the day on which the Royal Maundy ceremony takes place. This year it is being held again in Westminster Abbey.

The tradition of the Mandatum being performed by the English monarch goes back to at least the thirteenth century. From the late seventeenth century the pedelavium was discontinued, as was the presence of the Monarch until 1932 when King George V, following the suggestion of his cousin Princess Marie Louise resumed the practice of distributing the Maundy money, as has continiued to the present day. Maybe we can see that as a case of a reform of the reform, or partially recovering with hermeneutic of continuity from one of discontinuity. The same principle could be applied to the offering of gold, frankincense and myrrh on Epiphany in the Chapel Royal - the Monarch last did that in the time of King George II. 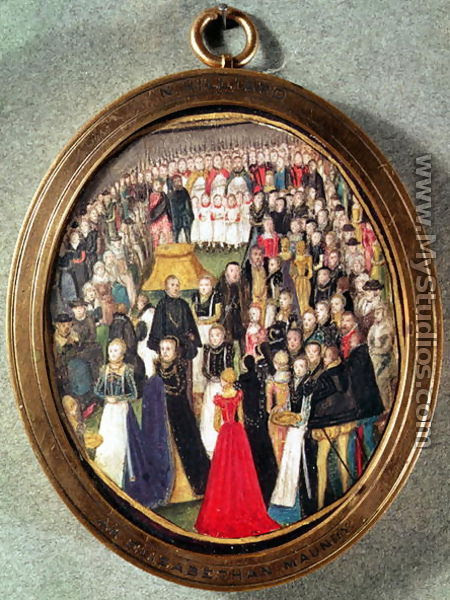 The Royal Maundy of Queen Elizabeth I c.1560
A minature by Lievine Teerlink
In the medieval period it was not just the monarch who carried out the mandatum - we know from household accounts that other princes and magnates did so as well as the liturgical ceremony performed buy Popes and Bishops. As with the Royal Maundy this latter action was an event outside the liturgy of the Mass, a feature which survived until the changes of the 1950s.
Something which seems particular to English practice is washing the feet or distributing food and clothing to as many men and women as the Monarch has years of age. This seems to have beeen established at least by the late fourteenth or early fifteenth century.

Elsewhere in Europe the custom was for the monarch to wash the feet of twelve men, as with the Episcopal ceremony, and for twelve women to have their feet washed by the Consort.

In Spain this ceremony survived in this form in the reigns of King Alfonso XII and King Alfonso XIII. Here the custom was for the King to serve a meal to the recipients. I am not sure if the ceremony has been revived since the 1975 restoration.

In Austria the ceremony was also performed. Emperor Francis Joseph and the Empress Elizabeth used to perform the ceremony, each with twelve poor people in the great Ceremonial Hall of the Hofburg in Vienna on Maundy Thursday. I recently found an engraving of this in a book on the Empress, but cannot find the picture online.

As an exercise in Royal humility, indeed in Christ-like humility, it is inevitibly ritualised, but anyone who has seen in person or on television the Queen distributing the Maundy money can recognise an authentic spirit of compassion in her demeanor as well as the reminder in the liturgy of the monarch as being at the service of their subjects. That is present in all Maundy ceremonies.

Interesting, is n't it, that those elected political leaders who so loudly claim to be of the people do not perform such ceremonies as a reminder to themselves or those they rule of the need for humility in high office. When did you last hear of the Presidential Maundy?