The New Liturgical Movement has recently had two posts about a spectacular rose cope at Wardour Chapel in Wiltshire and a very handsome medieval chasuble that has survived in the collection there.

Following the link about Wardour I found a site produced in connection with last year's display of treasures there, which, unfortunately, I was unable to visit. The history of the chapel includes a list of some of the items that were on display and some photographs, one of which I reproduce here. 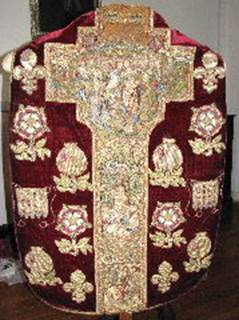 This vestment, known as the Westminster chasuble, has heraldic motifs on the red velvet fabric that help date it to the era of Queen Catherine of Aragon. Its alternating roses and pomegranates combined with the portcullis badge of the Beauforts and the fleur de lys point to her and her circle. It must therefore belong to the time after her marriage to Prince Arthur in 1501 or from her time as Queen after 1509 until the ''King's Great Matter" wrought such havoc in so many lives and churches, and the life of the nation.

I had seen the chasuble on television on John Betjeman's ABC of Churches many years ago, and was pleased to find this photograph, which is not unfortunately of the highest quality, to share.

I had half expected to see it at the Gothic exhibition at the V&A in 2003-4, but I think it was not on display, although other vestments that have survived from King Henry VII's rebuilding of the Westminster Lady Chapel were there.