On pilgrimage with William Wey

This lunchtime I attended an interesting lecture on "William Wey, the King's pilgrim" given by Francis Davey in the Convocation House at the Bodleian Library.

William Wey (1405/6–1476) was a Fellow of Exeter College in Oxford and later bursar of Eton. His accounts of his pilgrimages to Compostella, Rome and Jerusalem in the years 1456-62 were edited by Francis Davey and published by the Bodleian last year. The Oxford Dictionary of National Biography entry on him by Henry Summerson can be read here.
Since that was published in 2004, as the speaker explained, new material has become available which he was able to incorporate into his book


Amongst the points to which he drew attention was Wey's concern with exchange rates for money on his travels. He lists 40 types of currency, and would have depended upon letters of credit - probably from the Medici bank who had opened a London office in 1454. It is notoriously difficult to translate money values from such period into modern terms. One method suggests a multiplier of 437, another 500, but that helps put the 2 shillings fare from Dover to Calais into perspective; it was 4/3 for a man and a horse. The 40 ducats galley fee from Sicily to Jaffa amounts to something like £4000 in todays money. Totravel as Wey did required a sponsor - his income as a former fellow of Exeter or as bursar of Eton would not stretch to that and he may well have been sponsored by King HenryVI. te king certainly insisted that Eton gave him the time off with full pay.

An example of a sponor comes in the will of another west countryman, a Cornish mineowner who bequeathed 40 marks in 1406 to send a pilgrim on his behalf to the Holy Land. This was the equivalent of £11,000 - but had to cover nine months travel,lodging and food. Wey made that journey twice to the Holy Land.

Travel with large amounts of cash was not only risky but also impratical  - on the galleys pilgrims has a space six feet by eighteeen inches for themselves an was d their possessions.

His motivation was something he set out in his accound, giving ten reasons for pilgrimage. Important to him was the acquisition of indulgences. In Rome he obtained 39,200 years of remitted temporal punishment and seven plenary indulgences.

In the Holy Land he would have undertaken a Franciscan-guided thirteen day tour. On display was a photograph of a map in the Bodleian Wey probably owned of the Holy Land. He had particular fascination with renewable miracles such as the wood where the birds did not sing from passion Sunday until Easter, or the spring which marke dthe spot where the star of the Epiphany came to earth,or alamp whiche burned for a whole year in front of a crucifix on just one filling of oil, or the Miracle of the Holy Fire at the Holy Sepulchre in Jerusalem at Easter.

Christ's footprint was something he wanted to measure so as to calculate His height - notwithstanding the existence in Westminster Abbey of a similar relic of the Ascension. He was also very interested in the Valley of Jehosophat, where the Last Judgement will take place.

Another pilgrim, the German priest Felix Faber, was approached by afriend before going there and given a pebble with the friend's name on it so as to place it in the Valley and reserve a place for the Last Day - which, as Francis Davey pointed out, rather beats towels on poolside loungers.

Travel was hazardous. The classic account of the Holy Land pilgrimage in this period is R.J, Mitchell's The Spring Voyage , written in the 1930s from several fifteenth century accounts. Since then another has been found in recent years in the archives of Cologne, and published by the Bristol Record Society as The Case of Robert Sturmy. This, which in part covers the pilgrimage fleet of two galleys which included Wey himself, has many details he does not mention - international intrigue over the alum trade prompting Genoese pirates to atatck Venetian galleys, the death of Robert Sturmy in a battle at sea between Malta and Gozo and the attempt of a pirate captain to capture the wealthy English pilgrim John Tiptoft, Earl of Worcester. Worcester, who had arrived only 36 hours before departure from Venice, unlike the much longer waiting times for lesser mortals, complete with his retinue of 28, including not only chaplains, but also his organist. With the galleys being dogged by reports of an impending attack on their return Worcester eventually made his escape on afast boat from a Venetian outpost on the Albanian coast, to go on to study humanist ideas in Italy, return to England as a Yorkist Lord High Constable with an unenviable reputation for savagery as a judge in the years 1462 to 1470 before being beheaded himself in 1470  during the readeption of King Henry VI. 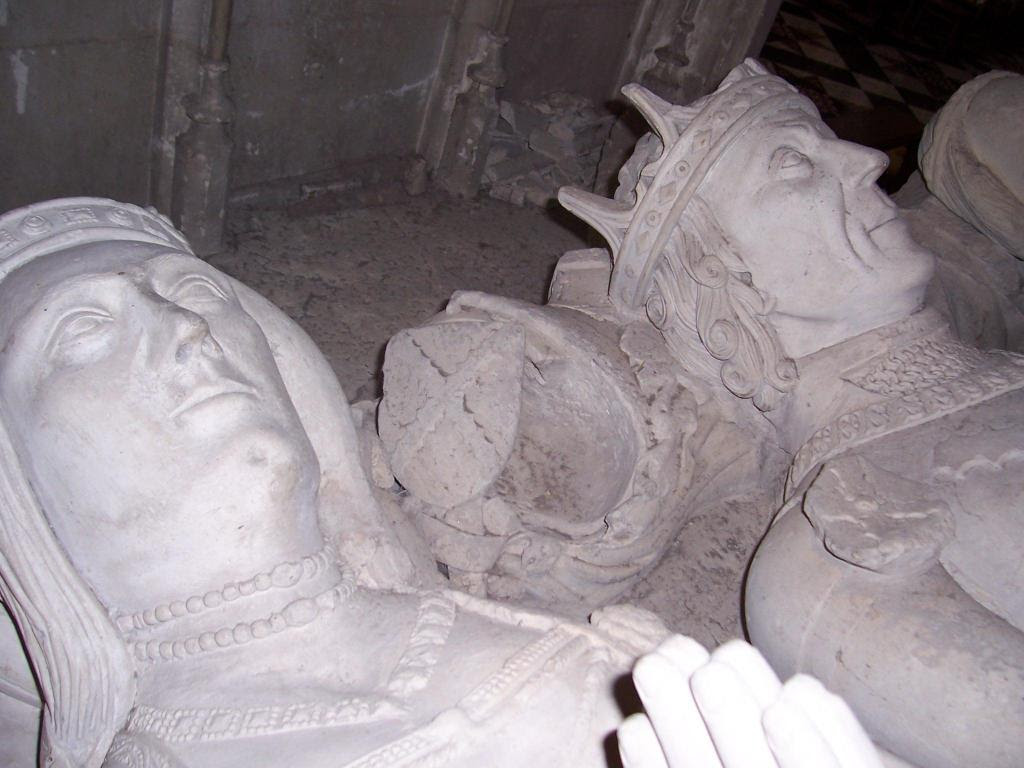 from his monument in Ely Cathedral.

Worcester was not the only aristocratic pilgrim of the period. Others who made the journey were Sir Baldwin Fulford from Devion, who accompanied Wey in 1456 and Earl Rivers in later years. Both of these men survived the pilgrimage only to fall beneath the headsman's axe in their native England in 1461 and 1483 respectively in the conflict between and within Lancaster and York.