The Panther and the Hind


Yesterday evening I finished reading The Panther and the Hind: A Theological History of Anglicanism by Fr Aidan Nichols O.P., and which was published in 1993. The title is taken from John Dryden's poem on the possibilities of reunion, which was itself published in 1687. 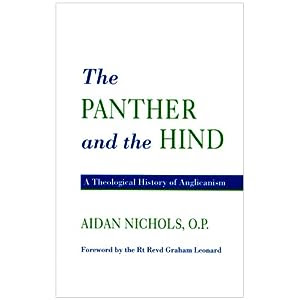 It is one of those books I know I should have read years ago, but now I have and it is an excellent study, succinct and scholarly.

It is a good time to have read it. At the conclusion on pp.179-80 Fr Nichols outlines something very much like the Ordinariate as a way forward for some Anglicans.

After commenting on the difficulty of finding a scheme to comprehend all Anglicans in reunion, he continues:

"...it does not follow that the more modest aim of repatriating a selectively defined ( yet historically not unrepresentative) Anglicanism within the continuous Catholic communion of the Church of Rome would meet with equally little success. So Drydon himself thought, in the moving plea for reunion, coupled, in its last line, with a promise of forgivess from the Recusant community for its years of persecution which forms a high point of the oratory of charity in The Hind and the Panther.

See how his Church, adorn'd with ev'ry grace.
With open arms, a kind forgiving face,
Stands ready to prevent her long-lost sons embrace.
Nor more did Joseph o'er his brethren weep,
Nor less himself could from discovery keep,
When in the crowd of suppliants they were seen,
And in their crew his best-beloved Benjamin.
That pious Joseph in the church behold,
To feed your famine, and refuse your gold;
The Joseph you exil'd, the Joseph whom you sold
The Hind and the Panther, II, 639-648
.
Prophetic words indeed from almost two decades ago, and we have indeed beheld a pious Joseph in the church, and one with a kind forgiving face.

Labels: Fr Aidan Nichols, Ordinariate, The Panther and the Hind