Although we are a week into Lent there is an interesting article about the imposition of ashes on Ash Wednesday by Fr Edward McNamara on the latest Zenit page ( Zenit 110315 ) which I have adapted slightly and illustrated as follows:

Historically, the use of ashes as a sign of penance is already found in the Old Testament, and even Jesus speaks of the necessity of some sinners to do penance in sackcloth and ashes (Matthew 11:21). Tertullian, saints Cyprian, Ambrose, Jerome, Augustine, and many other Church Fathers make frequent reference to this practice, especially in relationship with the practice of beginning a period of public penance for grave sins.

Apart from the relatively few public penitents, many other devout Christians confessed at the beginning of Lent so as to be able to receive daily Communion during this season and asked to be covered with ashes as a sign of humility after having received absolution. In the year 1091 Pope Urban II recommended this practice to both clergy and laity. Subsequently the rite of blessing and imposing the ashes became generalized and swiftly assumed considerable importance in the liturgical life of the faithful. At first, the rite was separate from Mass but eventually entered into the Mass itself around the 12th century.

It remained a rite technically seperate until the Novus Ordo missal was introduced. As with other ceremonies such as those at Candlemas as also with weddings, the ritual action preceded the celebration of Mass, rather than being comprehended by it as in the Novus Ordo. 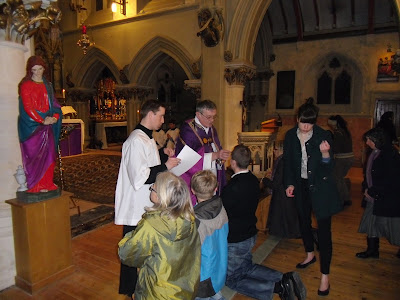 The imposition of ashes at St Mary Magdalen Brighton last week
Initially, men received ashes sprinkled upon the crown of the head, while the ashes were imposed upon women by making a sign of the cross on the forehead. This difference probably stems from the simple fact that women were obliged to keep their heads covered in church.

Today, the mode of imposing ashes varies from country to country according to custom. In most English-speaking countries water is added to the ashes to form a paste which is imposed by making a sign of the cross on the forehead. Many Catholics leave the mark of the ashes unwashed during the day as an outward testimony of their faith.

In much of Italy and in some other Romance-language countries, water is not added to the ashes. Rather, the ashes are imposed by making a sign of the cross above the crown of the head as the ashes fall upon the hair. This method has the advantage of capturing better the idea of ashes as dust, but does not leave a visible sign that can last during the day.

The use of a stamp as in some US parishes would appear to be motivated by a desire to maintain the sign during the day, even though this is merely an incidental, albeit positive, aspect of one particular mode of imposition. The danger is that this process could detract from what is essential to the ritual gesture, the act of receiving the imposition of ashes as a sign of personal penance and conversion.
Posted by Once I Was A Clever Boy at 10:05