My post the other day about folded chasubles included an illustration of St Gregory the Great, which reminded me that today is the anniversary of his death in 604, and used to be his feast day until 1970, when it was transferred to September 3rd. It is still his feast day in the missal used for the Extraordinary Form of Mass. Given his importance to English Christianity it seemed a pity not to post something about him today.

He must be accounted as one of the most influential of all the Popes, not merely because of the English mission sent under St Augustine in 596-7, but also because of his development of the Papal office in practical terms, his contribution to the liturgy and music of the Church and his writings as one of the Latin Doctors of the Church.

The picture below, which prompted this post, shows Pope St. Gregory the Great standing between his father, Gordianus, and his mother Silvia. It is an engraving of a now lost original which must be datable to his pontificate of 590-604 as he is shown with a square nimbus, indicationg that he was alive when the work was done. It is, I think, the only surviving contemporary picture of him to be known.

I found two other images online from a somewhat later date. The first, from the thirteenth century, shows the Dove of the Holy Spirit speaking into his ear of Saint Gregory the Great to indicate the inspired nature of his writing. He appears to be shown wearing the early form of the Papal crown rather than a mitre.

The second one looks to be earlier in date, but again shows St Gregory being inspired by the Holy Spirit and dictating to a scribe. This is one of several similar depictions of him to survive from the Carolingian and Ottonian eras. 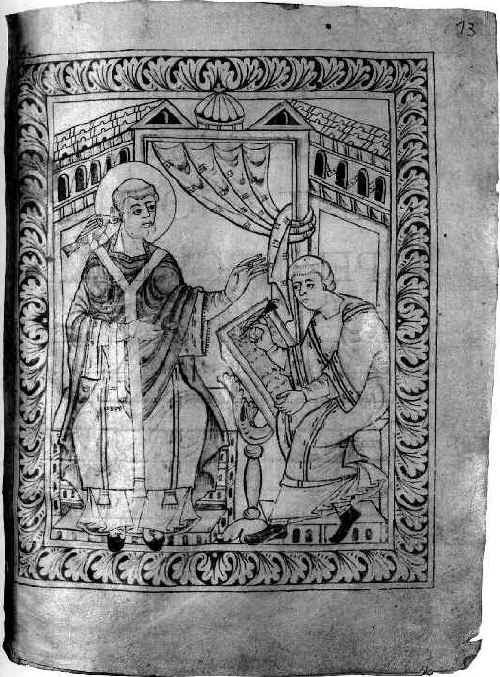 May St Gregory continue to pray for the Church in England and for the life of the Church as a whole.

May we continue to be grateful for his contribution to the life of the Church and especially to that of this country.