Having heard that there was to be the inaguration of six months of celebrations to mark the 950th anniversary of the apparitions of Our Lady to Richeldis de Faverches at Walsingham in 1061 with a Mass in Westminster Cathedral last Saturday I thought this called for a day out in London. Walsingham has been an important place in my pilgrimage of faith over many years and I wanted to join in the celebrations.

By a fortunate coincidence a good friend and fellow blogger was passing through Oxford and we arranged to meet up and travel up on the coach together to the cathedral. Thus the Last Knight and the Clever Boy set forth (which sounds a bit like something from Lewis Carroll, or "Childe Harold to the dark tower came" - or, methinks, shades of Cervantes...). Due to delays and demonstrations in London about government policies the coach was delayed and we did not arrive at the cathedral until the offertory. Nonetheless we were there, and able to participate in the occasion.
It was impressive to see the cathedral full and to see the presence of the Anglican Shrine Guardians escorting the statue from the Slipper Chapel in the procession at the end, along with Knights of the Holy Sepulchre and Knights of Malta, clergy from across the country, including the Ordinariate, a goodly numberr of diocesan and assistant bishops and the Archbishop of Westminster as principal celebrant.
Afterwards, as is usual on these occasions, there was the opportunity to meet up with other friends, and make new ones, on the cathedral piazza, before going off for a Lenten, non-alcoholic, drink in a pub and then a meal at an Italian restaurant before we went our seperate ways. 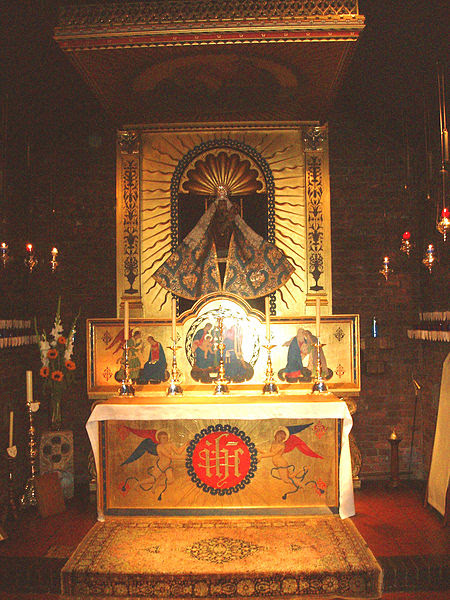 I am well nigh certain this is not the last post I shall put up about Walsingham this year, but I would say that anyone who has not visited this remarkable and holy place should do so. I once heard it described as graced, and that describes it well. Its qualities are indefineable, but there is no doubt when one is there that it is a special place. If you have not been, make this the year you go. If you have been, well you know you will want to go back to England's Nazareth to celebrate the anniversary.