Today is the putative feast day of St Thomas of Pontefract. I say putative as Thomas was never formally canonised, but today is the anniversary of his death in 1322, and he did enjoy a popular cult in the decades after his death.

Thomas, Earl of Lancaster was the cousin of King Edward II, and the politics of the years 1312-1322 shaped by their bitter disagreements, which ended with Thomas' defeat at the battle of Boroughbridge in March 1322, followed by his capture and trial and conviction for treason in his own castle at Pontefract, rapidly followed by his beheading on what became known as St Thomas' Hill on the outskirts of the town. As with some other medieval rebels, such as Simon de Montfort at Evesham, a cult sprang up around his tomb in the Cluniac priory in Pontefract, around apicture in St Paul's cathedral in London and, following the deposition of King Edward II in 1326-7, attempts were made to secure Thomas' canonisation. That did not come about despite appeals to Pope John XXII, and his cultus remained local and particular to the Lancastrian family. An office hymn was composed in his honour and pilgrimages made to Pontefract in the fourteenth century. for a number of years it was very popular and survived at Pontefract at least until the dissolution of the priory in 1539. His belt was believed to assist women in child birth and his hat was believed to aid sufferers from migraine and 'rye-asthma' - hay fever. On the site of his execution a memorial chapel was built by a Lancastrian retainer, Simon Symeon in 1361. Now destroyed some fragments of worked stone were found on the site in the 1940s.

As his biographer Dr John Maddicott argues in his book Thomas' sanctity is rather vitiated by his "repulsive" character. He appears to have been violent, harsh, contrary, selfish and promiscuous. Dr Maddicott's biography for the Oxford Dictionary of National Biography of Earl Thomas and his wife Countess Alice, the heiress of Pontefract, can be read here. 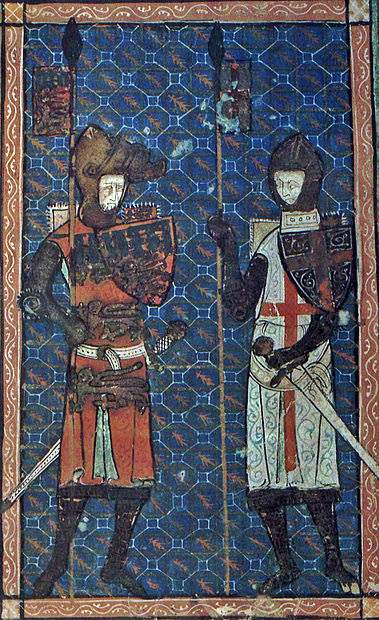 This manuscript indicates a rather more positive view of him. There has been the suggestion that the figure may be his father, Earl Edmund (d.1296), but the five points on the label on his shield may well indicate Thomas as a grandson of King Henry III. Assuming that it is Thomas he is paired with St George, who was increasingly assuming the role of the nation's patron saint.

One surviving piece of devotion to him is the wall painting shown above in South Newington church in north Oxfordshire. The church has a wonderful series of fragments of medieval wall paintings. To that series were added a pair depicting the martyrdoms of St Thomas of Canterbury and St Thomas of Pontefract. Although much damaged they are still clear, and indicate how some at least saw Thomas of Lancaster in the years after his death. The painting were apparently commissioned by a retainer of the Earl.

I have long known of the South Newington painting from photographs, but it was only in recent years that I got to see it whilst on an historic church-crawl with Fr Jerome Bertram of the Oxford Oratory in 2005. The visit was a great delight, to see the painting after so many years, and all the others that survive in the church. There is an article about them here , whence comes the illustration I have copied.
There also survives in the British Museum a large lead openwork plaque in the style of the pilgrim badges from the period depicting scenes from the life and death of Thomas. This presumably was made in some numbers for churches or private devotion.

A long time ago I saw a copy of a drawing of a medieval vestment orphrey depicting Thomas - I ought to check up on this, but I think it was taken from the publications of the Society of Antiquaries.

Here in Oxfordshire there may be another link. In the very intersting church at Stanton Harcourt are the remains of the shrine base of St Edburga from Bicester Priory. This dates from Thomas' lifetime. On the base are a series of coats of arms with small heads above them. I think that these may well be meant to portray the owners of the arms and the two on the right in this photograph are the arms of Earl Thomas and of his wife, Alice , with a male and a female head above them. 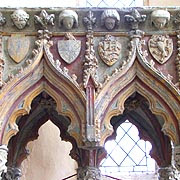 This is one of those pieces of antiquarian research I keep meaning to do some more research on and write up for a suitable academic journal.