Last Monday evening I attended a meeting of the Oxford Bibliographical Society, where we heard a lecture by Maria Luisa López-Vidriero is the director of the Royal Library in Madrid and co-director of the Institute for the History of the Book and Reading in Salamanca. Her talk, entitled "Masculine ou Feminine: Ways of Becoming Accomplished Heirs Apparent in Late Eighteenth-Century Spain" dealt with the contents of the private libraries of the Prince and Princess of Asturias, Carlos Antonio, the future King Charles IV, and Maria Luisa of Parma, and which are still preserved in Madrid.

Charles, Prince of Asturias in 1765 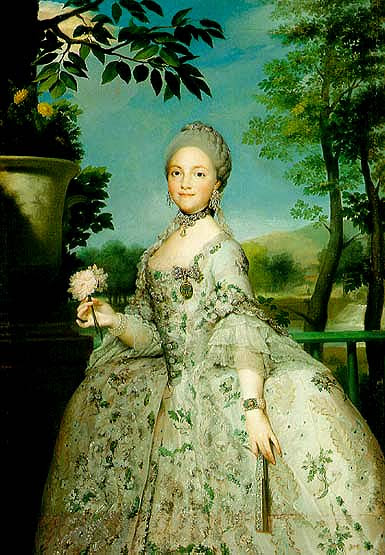 It was in part a reflection on gender differentiation as indicated by their libraries and related to the role of the royal family in Spain during the Enlightenment. I assume the libraries represent what King Charles III, who was influenced by contemporary reformist ideas, and his advisors thought was the ideal programme for the heir amd his wife.

Amongst the points made by Dr López-Vidriero in her lecture were the following Charles and Maria Luisa, who were first cousins, both being grandchildren of King Philip V and his second wife, Elizabeth Farnese, were married in a lavish celebration in 1765. The architect of King Charles III's new Royal Palace was called upon to design the decorations and the theme was very much an Enlightenment view of monarchy. Thus Mars and Minerva and Perseus and Isis were paired as ideals for the young couple to follow. Following Rousseauesque ideas they wre expected to bring not merely humanity and piety to their dealings with their people but Maria Luisa was to bring tender affection to her new country. Happiness would spring from the natural background. What the royal couple approved or condemned would indeed be approved or condemned by the realm.

Their libraries reinforce these themes. Charles owned 1,473 titles in 2,880 volumes, and Maria Luisa 524 titles. The books, 90% of which were magnificently bound by the bindery attached to the palace, and show the high level of the craft in the Spain of the perod. The designs reflect what was deemed appropraite to the owners. One of Maria Luisa's books has abinding that reproduces the design of a dinner service she owned, and other of her books have beautiful bindings. Charles' books had handsome but more masculine bindings. Binding was an industry the Crown wished to promote, and the styles reflect the changing fortunes of French and English influence - one binder was trained in England

By comparison with her grandmother Queen Elizabeth Farnese, where French books predominate, with Maria Luisa it is Spanish which predominates as a language, Books on morality and prayer, together with novels, especially historical ones, predominate whereas the classics are poorly represented and there are only seven works by Cervantes included. Charles' library was more concerned with practical life, emphasising the ideas of the Enlightenment, his role asa model catholic and also as a collector. Whereas there were no incunables in Maria Luisa's collection 50% of his library was pre-eighteenth century.

Many of Maria Luisa's books indicate her connections with Parma, which is followed by books published in Rome and Naples.

Many of the books indicate the serious nature and purpose of the library. Facing problems and change they show an awareness of social problems 70% of Maria Luisa's books were official publications dealing with the progress of the Enlightenment in Spain. Charles was clearly expected to keep up to date with developments over awide range of subjects , including those in science

As a library it appears to reflect an ideal programme for contemporary monarchs. It is not clear who chose the contents of the library. As King Charles III had been one of those European monarchs anxious to be rid of the Jesuits it appears as a collection illustrating that his dynasty could manage without Jesuit influence, and could do so with a new curriculum and new library books.

There is no evidence of use of the books or any annotations by the Prince or Princess - which, of course, proves nothing more than that they did not write in their books, not whether they used them.

Dr López-Vidriero ended her talk with two of Goya's devastating and unflattering portraits of the King and Queen in later years. The contents of their libraries and their images as monarchs suggest a disjunction somewhere along the way. The contents of their library and lives of the King and Queen may represent the triumph of experience over expectation. 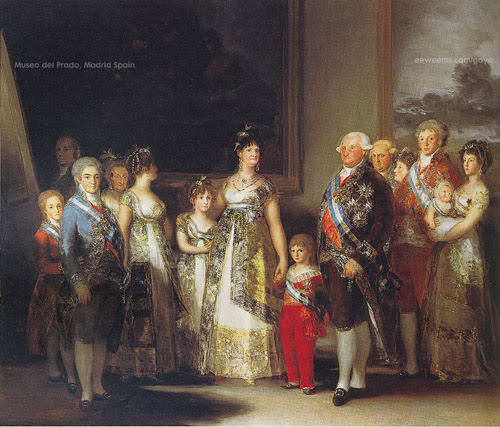 The French novelist Theòphile Gautier said of this painting: "It looks as if the corner baker and his wife after they have won the lottery."

"Goya's true-to-life portrait probably shocked no one; even the Queen on occasion had made light of her ugliness, perhaps expecting to be contradicted. The royal couple expressed neither displeasure nor enthusiasm over the work. And although Goya never painted for the King and Queen again, it was apparently not because they were dissatisfied."
Image:eeweems.com