Today being the feast of St Bruno is an opportunity to reflect upon the Carthusian order and its history. I was very struck when I read John Cassian by the way in which his description of early Egyptian monasticism is like the Carthusian model. This point is one that I had not seen brought out properly in more general books on medieval monasticism, and shows the influence of Cassian in the eleventh century - indeed is a reminder of his importance as a writer on monastic life for over a millenium.

More particularly my thoughts turn to that great flowering of Carthusian life in late medieval England and Europe. On several occasions I have visited the remains of Mount Grace Priory - or to give it its proper title that of the Assumption of Our Lady and St Nicholas of Mount Grace of Ingelby - and it is a moving and fascinating place to experience. Recent scholarship has shown how important it was in disseminating devotional texts in the fifteenth and early sixteenth centuries. 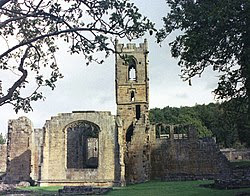 There is a good introduction to the priory here. After the dissolution the little chapel on the hill above the ruins remained as a recusant centre and has now been restored as a place of pilgrimage.
Mount Grace is the best preserved of the houses, but Beauvale in Nottinghamshire is an interesting ruin. The remains are now part of a farm and there are plans announced in 2009, to open it to the public. When I visited it in 1999 we had to view it from the road, but even from several hundred yards it is striking. There is an account of the priory here,and a series of articles from 1908 with other illustrations here, which is also well worth looking at. Both St John Houghton and St Robert Lawrence, two of the Carthusian martyrs of 1535, had served as Priors of Beauvale.

My particular interest in visiting the site, over and beyond my usual historical curiosity, was the fact that Bishop Fleming made at least two viists to stay at the Priory in the 1420s. He seems to have acted as an unofficial protector of the Carthusian order in England - perhaps inspired by the fact of being the latest sucessor of the Carthusian Saint Hugh (d.1200) at Lincoln. In 1428 Fleming is recorded as having consecrated the new bell of the London Charterhouse, where some parts of the monastic buildings survive in the current complex. 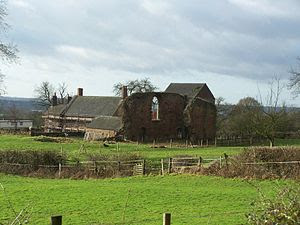