Today is the Feast, indeed here in Oxford, the local Solemnity, of St Frideswide, the patron of the City and University.

Today historians would be much more positive about her and her life than the story told of Canon Prof Claude Jenkins preaching as follows on St Frideswide's day in the 1930s - I give the sermon in its entirity - "St Frideswide. She did n't exist."

That is less than fair to the woman who, in many ways, is indeed the foundress of Oxford. Her shrine base has in recent years been restored and re-erected in what is now thought to have been its original place in her shrine chapel in what is now the cathedral, the handsome fourteenth century Latin Chapel:

Image by Jeren C on Flickr
Her relics are still within the cathedral, though now mixed with the bones of the wife of the sixteenth century exiled Italian protestant academic Peter Martyr - the bones were mixed after 1558 to prevent profanation of either set. Today I assume archaeological testing could easily distinguish eighth and sixteenth century bones. 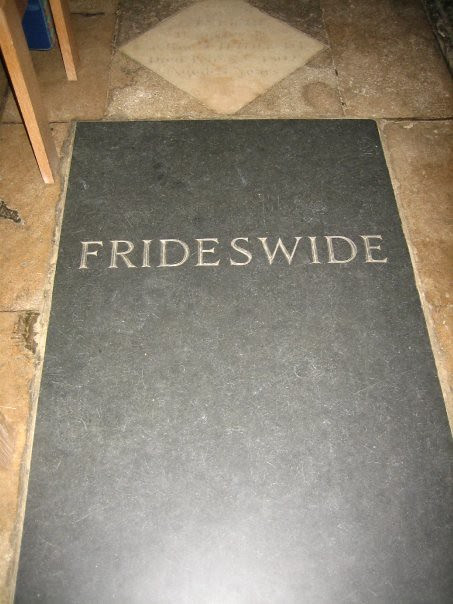 The legendary life of St Fridewide with accompanying notes can be found recounted here.

John Blair's immensely readable and learned Anglo-Saxon Oxfordshire provides an excellent history not only of what is now the county in the period but an introduction to many aspects of Anglo-Saxon life in general. He not only provides the context for St Fridewide's life and legend, but also the fascinating point that such was Fridewide's perveived power that until Edward I no King of England appears to have entered the walled city of Oxford for fear of suffering the fate of Algar of Leicester. Thus the twelfth century royal palace of Beaumont was outside the northern walls, occupying the site of Beaumont St and the Ashmolean Museum. 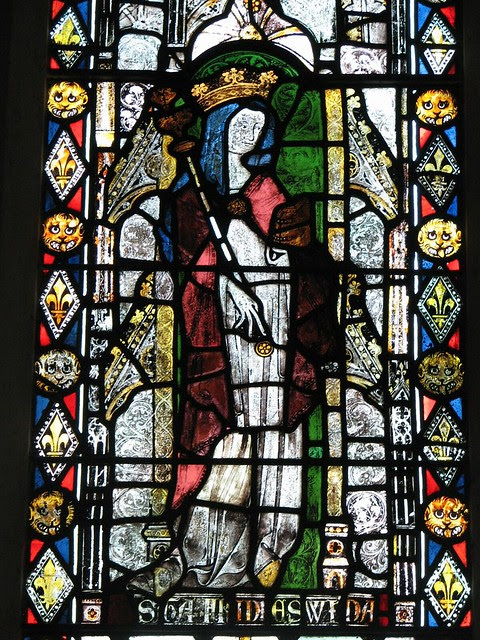 14th-century glass in the Latin chapel of Oxford Cathedral

" Saint Frideswide (c. 650 – October 19, 727) was (according to legend) daughter of King Didan and Safrida. She founded a church near Oxford, but Prince Alfgar of Mercia decided to marry her. She refused his advances, hiding from him in a tub in the forest. When she returned to Oxford, Alfgar besieged her until he was struck blind. She then prayed to St Margaret of Antioch and St Catherine of Alexandria. The two saints appeared to Frideswide and told her to strike her staff against the ground. When she did so, a well sprang up. This well (now known as the Treacle Well, located in the churchyard of St Margaret's, Binsey just outside Oxford) cured Alfgar's blindness.This explains why this panel is attended by panels of Ss Margaret and Catherine."

Treacle, of course, means balm or healing in this context - as in the so-called "Treacle Bible" which renders Is ther balm in Gilead as "Is there treacle in Gilead." It is this well which is the inspiration for the Treacle Well in the Dormouse's story at the Mad Hatter's Tea party in "Alice in Wonderland" 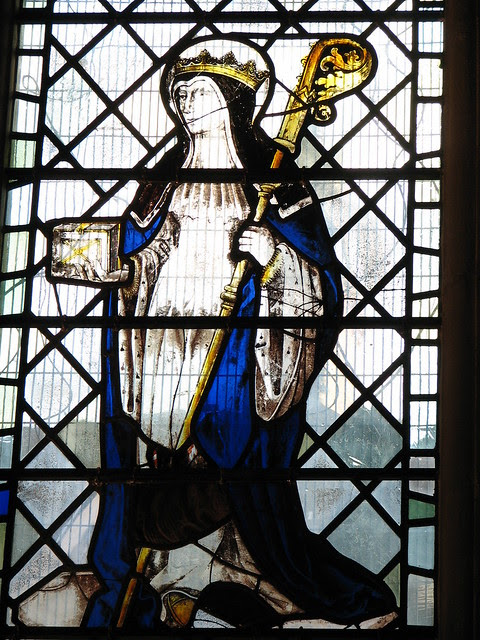 16th-century glass from Balliol College chapel of the patroness of Oxford.

I trust that on this day everyone in Oxford moved with a "Queenly sway"?