The new exhibition at the Christ Church Picture Gallery is Henry Aldrich (1648-1710) - An Oxford Universal Man. 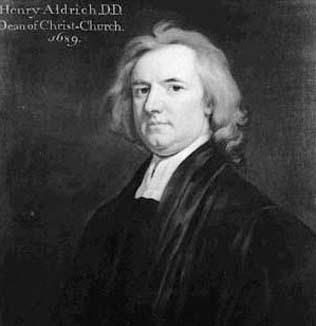 Dean Henry Aldrich from a portrait by his freind Sir Godfrey Kneller
Image from Wikipedia
The exhibition marks the tercentenary of his death. Aldrich was Dean of Christ Church from 1689 until his death, and in addition to being aclergyman was a politician . a scholar - the author of a standard textbook on logic - a collector, a musician, and an architect. He desugned All Saints church (now Lincoln Library) in the High - although the church as built incorporates varaitions on his origina design - and Peckwater Quad at Christ Church. This, built between 1706 and 1710 is, according to the exhibition, the earliest 'Palladian'building in England, antedating the work of Lord Burlington.
Aldrich was also a noted bon viveur and the author of an explanation in Latin of why people drink; the following is a translation:

If on my theme I rightly think,
There are five reasons why men drink:—
Good wine; a friend; because I'm dry;
Or lest I should be by and by;
Or — any other reason why.

The exhibition concentrates on Aldrich's bequest of prints to the college and their influence on successive Oxford Almanacks. There are also two portraits of him on display - one as a young man circa 1666, the other, one of the versions ofthe Kneller as in the illustration above