Today is the Feast of the Translation of St Edward the Confessor. The day commemorates the move of the relics in 1163 within the abbey church at Westminster built by Edward at the time of his canonization.

St Edward as depicted on the Bayeux Tapestry
His shrine in the present, thirteenth century, Westminster Abbey is shown here:

and here is the scene in the Abbey on the occasion of the Papal visit, as part of which the Pope and the Archbishop of Canterbury prayed at St Edward's shrine behind the High Altar. 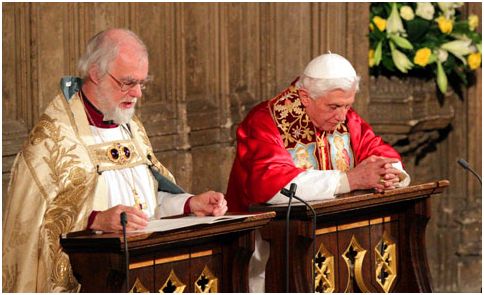 The Pope and the Archbishop of Canterbury at prayer together at the Shrine of St Edward the Confessor.
Image from Idle Speculations
St Edward's positionas patron of the Monarchy and exemplar of English Kingship is enshrined in St Edward's Crown, used to crown the monarch.but not worn subsequently. This practice is similar to that followed in France, Hungary and Bohemia.

Bless we beseech thee this Crown and so sanctify thy servant Elizabeth, upon whose head this day thou dost place it for a sign of royal majesty ...

There have been two St.Edward's Crowns. The first was believed to have belonged to Edward the Confessor. The second was the crown which replaced it in 1661.

The original St. Edward's crown was kept at Westminster Abbey rather than in the Tower of London. This can be seen as indications its status as a relic in the custody of the Church. Aidan Nichols expresses this elegantly and susuccinctly in The Realm in his passage about the centrality of the Coronation to national life. By 1399 it had, if Froissart is to be believed accurate in his description, and he makes the point as clearly being a significant one, that King Henry IV was crowned with St Edward's Crown and that it was arched - implying sovereignty directly under God. As Henry's coronation followed rapidly upon the deposition of King Richard II, and from what is clear about Richard's devotion to St Edward and his exalted view of his regal position. it may well be that it was he who had added the arches. The effect may, possibly, have been rather like his father-in-law Charles IV's Crown of St Wenceslas, about which I wrote recently, although the English crown appears to have always alternated crosses and fleur de lys:

Following the regicide of Charles I in 1649 and the `abolition'of the Monarchy St. Edward's Crown was taken to the Tower of London to be melted down at the Mint. However there is no evidence that the metal was actually used for coins and it is thought that it may have been used to make the crown that Cromwell is said to have ordered in 1656 and which was displayed at his funeral two years later.

At the Restoration of the Monarchy in 1660, directions were given for a new 'St. Edward's Crowne'. Partly on the basis that only one new crown was delivered, but two were in use at the 1661 Coronation, it has been suggested that the crown which existed in the 1650s was refashioned. It has been suggested that the same gold from the old crown, from the Treasury supply, may have been used to make the new St. Edward's Crown in 1661. The work of Robert Vyner, who made the whole new set of regalia, it is made with 4lb 12oz of solid gold. From 1661 until the early twentieth century, the crown was set with stones hired for the coronation and then returned and replaced with paste stones.

The design of the present crown may well reflect that of its predecessor. In 1649 it was described as "King Alfred's crowne" and as being of gold wirework and set with slight stones and two little bells. Assuming a missing comma between "gold" and "wirework", with the wirework referring to the mounts for the stones, and that the pendant pearls from the cross on the monde are the representitives of the bells what Robert Vyner produced may well be a close or fairly close reproduction of what had been lost. His Imperial State Crown was not however very similar to that which was lost in 1649 - but that is another story about which I will post on another occasion.

From 1702 until the early 19th Century the crown was not actually used for the Coronation, but was instead only carried in the procession as a symbolic object. At Queen Victoria's Coronation in 1838 it did not even leave the Tower of London.

King Edward VII decided to revive the central role of the crown of his saintly namesake and St. Edward's crown was refurbished and prepared for his coronation in 1902. However, he had to abandon his plans to wear the heavy St. Edward's Crown as at the time he was recuperating after an appendicitis operation, and instead, like his mother was crowned with the Imperial State Crown, although on both occasions it was referred to as St Edward's Crown. For the coronation of King George V in 1911, Garrards carried out £375 worth of work, permanently resetting the crown with 444 precious and semi-precious stones. Since then it has once again been used as the actual Coronation Crown. In 1911 King George V quickly exchanged it for the lighter Imperial State Crown, but both King George VI and Queen Elizabeth II wore it for the enthronement and homage until the Communion at their Coronations.

Meanwhile I am off to start my novena to that sainted King of the twentieth century, Bl.Emperor Charles of Austria, in the lead up to his feast day on October 21st. It can be found on the Emperor Charles League of Prayer website.

For Blessed Karl's novena, one can read it on my blog also -