October 4th-5th is the centenary of the 1910 revolution in Portuga1 which led to the exile of the monarchy and established a republican regime. Doubtless there will be celebrations as October 5th "Republic Day" is the current national day in Portugal.

I would venture to suggest that there is nothing for the Portuguese to celebrate and a great deal for them to regret in this anniversary, when the nation repudiated the institution that had created it eight centuries earlier.

There is a biography of King Manuel II, who was forced into exile, here. 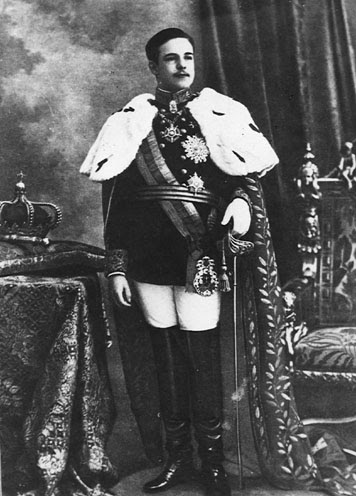 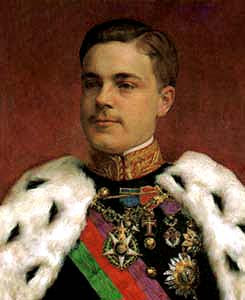 A colour version of the above portrait. The King is wearing the riband of the Three Orders - the three ancient crusading Orders of of Aviz (green), Christ (red) and Santiago (purple) - and the collar of the Order of the Tower and the Sword, founded by King Afonso V in the fifteenth century
He lived in exile in England at Fulwell at Twickenham. The Catholic Church of St James there now has a memorial to the King who was a regular worshipper and benefactor - there is an article about it here.
No one could deny that Portugal at the beginning of the twentieth century faced serious problems as a nation. Overthrowing the monarchy and the traditional order appealed to some as a solution; they appear to have been influenced by the example of the French Third Republic. This was, of course, patently wrong as a solution, and not the answer to the issues facing the country. In 1908 King Carlos I and the Prince Royal Luis Felipe were assassinated in Lisbon and King Manuel narrowly escaped the death in the same attack. There is a good account of the background and the murders here.There are also online biographies of the King and the Prince Royal. This was a clear example of that terrible tendency to resort to violence to attack and destroy the established order that culminated in the Sarajevo assassination in 1914.

In 2008, when the Lisbon government forbade participation in commemorations of those terrible events of representitives of the state and the armed forces, it was left to the Royal House to recall the King and Prince. Incidentally on the anniversary I arranged a Requiem Mass in the Extraordinary Form for them here at the Oratory in Oxford.

Now clearly one can ask who would want to be ruled by regicides or their allies. After the 1910 revolution - more a coup by disaffected members of the military and their radical allies - there were a series of left wing, radical, anti-clerical governments, political instability and coups, and attempts to restore the King. This is the backbround to the apparitions at Fatima in 1917, when the Portuguese church was under attack. From 1928, and certainly from 1932 until 1974 there was Salazar's Estado Novo. Now I can see that the underlying cobncept of applying Catholic social teaching as a basis for government has much to commend it, but as an actual system it became unresponsive to a world that was changing, and lacked the mechanism to achieve peaceful change and development. The result was that change with the 1974 revolution led to a return to political radicalism and instability in the period 1974-6 indeed the real fear of a communist takeover. Post 1976 the country has become part of the EU and followed the contemporary European paths of relativism and pseudo liberalism.

The obvious contract is with its immediate neighbour Spain. There the rstoration of the monarchy in the constitution in 1947 meant that after 1975 it could as an institution articulate the national mood, and achieve a successful transition and development. That is not to say I agree with all that has been done in terms of social policy in Spain in recent years; it is to say that Spain has managed successfully to blend its historic institutions and nature with a world that continues to change.

The failure to reinstate the monarchy underlies many of the instabilities of Portuguese politics. Thus even in 1910 the arms of the state remained oin a new nationalflag of conciously partisan, republican design as here. Since the 1920s the country has, whilst remaining a republic, displayed an ambivalent attitude to the Monarchy. Thus King Manuel's body was returne din 1932 with full honours and buried in the family vault, and in the following years the then President had two ADCs - one republican, the other monarchist. Several of the chivalric orders of the monarchy were restablished (with slightly changed insignia). There was talk of a restoration under Salazar, and the law of exile revoked. In that era the Monarchist party was the only political novement that was permitted other than the government party. This ambivalence has continued since 1974 - thus when the Duke of Braganza and claimant to the throne, D. Duarte Pio married in 1995, the guest of honour was the President of the Republic and the ceremony was carried live in television - despite attempts to disrupt coverage by leftists. Today Dom Duarte acts and can be seen as a representitive of the country.

A hundred years on from the events of 1908-10 I am firmly of the opinion that the loss of the monarchy was a loss, a catastrophic loss for Portugal. As a nation it needs to return to the roots whence it is sprung. Rather than celebrating the revolution of 1910 it should undo the damage and restore the Monarchy.

The Mad Monarchist has a pair of linked articles on the events of 1910 and their aftermath here.
Posted by Once I Was A Clever Boy at 17:15

Thanks for this, John. I've linked to the Mad Monarchist from your blog and he certainly does do his research well. I discovered in this way one brilliant figure in the history of the country that I didn't know about: Henrique de Paiva Couceiro (http://madmonarchist.blogspot.com/2010/09/monarchist-profile-henrique-mitchell-de.html).

Happily, the monarchist movement in Portugal is going strong, and they are optimistic (http://realfamiliaportuguesa.blogspot.com/2010/10/os-monarquicos.html). This same blog has recent Youtube footage of SAR Dom Duarte at Guimaraes, on Wednesday.

It seems that Dom Duarte is very well respected, even by the socialistas. Which bodes well for the future.