This past weekend has, of course, been the first time the feast of Bl. John Henry Newman has been observed. As I am in Oxford and with all the interest surrounding the Beatification the celebration has been quite extensive.
For me it started with showing a party from St Bede's Hall and some seminarians from the North American College in Rome around Oriel on Friday afternoon, and looking at places Newman must have known on adaily basis from 1822 until 1845.
That evening the Oxford Oratory had its annual Night Walk pilgrimage to Littlemore. Hardly surprisingly the numbers were up on previous years and we followe dthe established route through Newman's Oxford, with pauses for reading and prayers at sites associated with him before walking out via the houses his mother and sisters inhabited at Rose Hill to Littlemore. There we had devotions with readings before the Blessed Sacrament in Bl. Dominic Barberi church, before processing to the College and cocluding the pilgrimage in the restored chapel. If you are ever in Oxford on the evening of October 8th I would urge you to join this devotional and very enjoyable walk.

On Saturday there was Mass for the Feast celebrated in Bl. Dominic Barberi by Fr Byrne, Provost of the Oxford Oratory. and then at 5 a joint Anglican- Catholic service in St Mary the Virgin in The High with the reading of one of Newman's sermons - the Cross the measure of the world from 1841 - from the pulpit where it was first delivered, by Nigel Cooke of the RSC. On display were pictures of Bl. John Henry and a chalice, or perhaps a ciborium given in 1837 to the church whilst he was still Vicar. It is a handsome piece, with a relief copied from Leonardo's Last Supper on one side. We were invited to handle it, and indeed venerate it as a relic of the new Beatus. Following that I was at a reception in Oriel SCR for many of those who had attended the service. Quite what Provosts Coplestone and Hawkins, whose portraits in D.D. robes looked down upon us from the walls, would have made of their younger colleague's latest achievement is amatter for a little speculation. I rounded off the day with dinner with the very distinguished scholar of Newman and the Oxford Movement, Peter Nockles, whom I have got to know through his participation in the new, collaborative, history of Oriel which is currently being written.

Yesterday the Oxford Oratory transferred the new Feast to the Sunday and at the Sung Mass the celebrant was Bishop John Arnold from the Westminster diocese. The preacher was Fr Robert Byrne, who drew out the Oratorian nature of Newman's spirituality and how it provided the context within which Bl. John Henry fulfilled his vocation. In the evening the Oratory celebrated Solemn Vespers of the Feast in the traditional form.

That excellent photographer Br Lawrence Lew, O.P. published on the New Liturgical Movement site this splendid view of the new shrine in the Oxford Oratory, together with the accompanying note, and I have no compunction in reproducing it here: 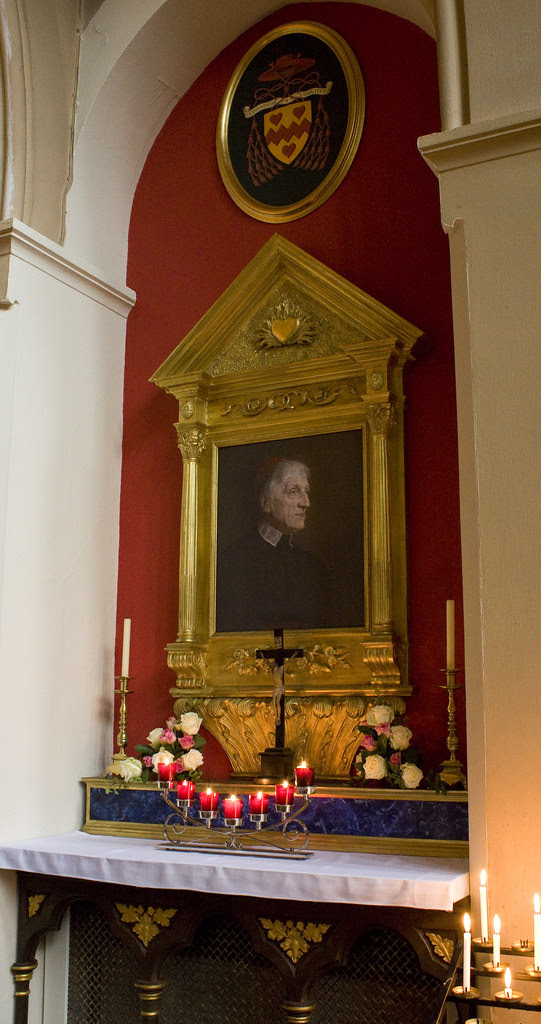 Stay with me, and then I shall begin to shine as you shine: so to shine as to be a light to others.

The light, O Jesus, will be all from you. None of it will be mine. No merit to me. It will be you who shines through me upon others. O let me thus praise you, in the way which you do love best, by shining on all those around me. Give light to them as well as to me; light them with me, through me. Teach me to show forth your praise, your truth, your will.

Make me preach you without preaching- not by words, but by my example and by the catching force, the sympathetic influence, of what I do - by my visible resemblance to your saints, and the evident fullness of the love which my heart bears to you. Amen.

The photo above is of the shrine to Blessed John Henry Newman in the Oxford Oratory taken on 9 October 2010, the first feast day of this new beatus. According to the Oratory's website, the painting of Newman is by William Ouless, the aedicule and altarino by Timothy Newbery, and the achievement of arms by Tom Meek.